Home > A Level and IB > History > The Nazi Racial State
How was anti- Semitism in Nazi Germany rooted in the past?
There is a long tradition of anti- Semitism in Europe.1. Religious resentment of the Christians towards the Jews for killing Jesus. Jews were used as scapegoats for the problems in society
1 of 25
How did social changes affect the development of anti- Semitism ?
Intellectual developemnents led to the deepening of anti-Semitism + changing social condition. Jews had migrated from eastern Europe and were initially quite improvished but their fortunes grew and they were soon seen as priviledged
2 of 25
Give some statistics for the positions Jews played in society
In 1933 Jews = 1% of population but made up 16% of lawyers and 10 % of doctors
3 of 25
What were the causes of anti- Semitism in Germany ?
The emergence of right- wing volkish nationalism even before 1914. The 'stab in the back myth' of 1918 exacerbated. Hitler's obsessive hatred of the Jews changed it into a racial ideology of hatred. Social Darwinism. Weakness of Weimar.
4 of 25
Did Nazi anti- semitism change over time?
Yes, gradually. Legal discrimination -> Propaganda and indoctrination against the Jews -> Violence against the Jews -> Forced emigration -> ' Final solution' = extermination
5 of 25
Name key laws in the legal descrimination of the Jews
1935 Nuremburg Race Laws ( Lost German citizenship and were not allowed to inter-marry)
6 of 25
When were Jewish pupils not allowed to go to university or school anymore?
November 15 1938
7 of 25
When was the first official boycott of Jewish shops?
1 April 1933
8 of 25
When were Jewish people given curfews?
September 1939
9 of 25
What methods/ means did the Nazis use to indoctrinate people into hating the Jews?
Posters and signs. Newspapers e.g. the Angriff. Cinema
10 of 25
How did the SA's treatment of the Jews change over the years?
The became much more violent and created a sense of terror within the community.
11 of 25
What and when was Kristallnacht?
A violent pogrom against the Jews. 9-10 November 1938.
12 of 25
What is a pogrom?
An organized or encouraged massacre of innocent people.
13 of 25
When was the Central Office for Jewish Emigration created? What was its job?
1939. Forced emigration of the Jewish people.
14 of 25
Roughly about what percentage of the Jewish population had been forcibly removed from Germany before the war?
About half
15 of 25
Why was the year 1938 so significant?
It marked the start of radicalisation of anti- Semitism in Nazi German= Legal laws, violence - Kristallnacht.
16 of 25
How did Nazi anti- semitism degenerate into genocide?
The Nazis had responsibility of more Jews after the victory in Poland. The start of the war made emigration of the Jews more and more difficult - they were moved to ghettos but it didn't end there.
17 of 25
Which event marked the beginning of the genocide
Invasion of Russia 1941- ** Einsatzgruppen started to round up the Jews and murder them by mass shootings.
18 of 25
What was the ' Final Solution'?
A euphemism used by the Nazi leadership to describe the extermination of Jews from 1941
19 of 25
When was the Wansee conference ?
20th Jan 1942.
20 of 25
What was the significance of the Wansee conference?
It was decided at this conference that the mass exterminaion of the Jews should begin. In the course of 1942 a number of extermination camps were built in Poland
21 of 25
Name some of the most infamous extermination camps
Auschwitz, Treblinka and Sobibor.
22 of 25
Why were the gypsies persecuted?
They were viewed as ' outsiders'. They were not Christian and they had their own distinct traditions. They were non- white. Their ' traveller' lifestyle was resented.
23 of 25
Approximately how many gypsies were exterminated from south- eastern Europe?
between 225 000 and 500 000
24 of 25
Why did the Holocaust happen?
Hitler's hatred of the Jews and desire to exterminate them. The consistent gradualist policy that escalated to their extermination.
25 of 25

How did social changes affect the development of anti- Semitism ?

Intellectual developemnents led to the deepening of anti-Semitism + changing social condition. Jews had migrated from eastern Europe and were initially quite improvished but their fortunes grew and they were soon seen as priviledged

Give some statistics for the positions Jews played in society 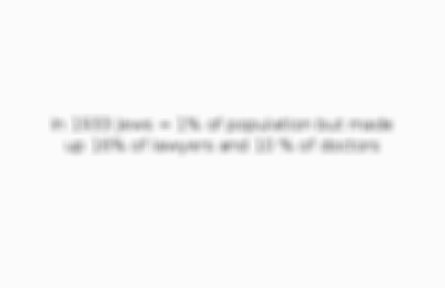 What were the causes of anti- Semitism in Germany ? 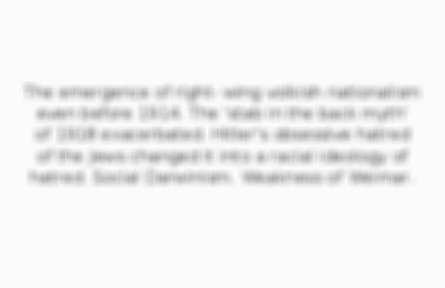 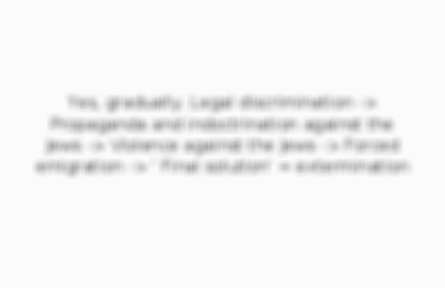