Home > GCSE > Religious Studies > Philosophy and Ethics - Religion & Science
What is Creationism?
Creationism is the idea that God created the world.
1 of 13
What did William Paley say about a watch and the world? (Creationism/Christianity)
Paley said that the watch was created by someone as it is too complicated to of just appeared from nowhere. This is just like the earth, it is too complicated for it just to off appeared from nowhere ie. the big bang.
2 of 13
What is the book of Genisis?
The book of genesis is the first book of the bible. It is an account of how to world was created . (Seven days of creation)
3 of 13
Name the seven days of creation?
Day 1) Night & Day - Day 2) Sky/water - Day 3) Earth,sea & Plants - Day 4) Sun,moon & Stars - Day 5) Sea creatures & Birds - Day 6) Animals & Humans - Day 7) God rested
4 of 13
What would christians say about god?
They would say he is omnipotent (All-powerful) and omnibenevolent (all-loving) .Some say god left us till last to create us especially.
5 of 13
What is something scientists would say about our origin?
People would say why did God create the universe and all the other planets when theres no use for them and theres no activity on them.
6 of 13
What is the big bang theory?
A scientists theory about how the earth was created. They say it was from an explosion of a singularity which has expanded, the evidence of this is red shift.
7 of 13
What is the theory of Evolution?
That life started out simple but over millions of years we adapted to our surrounding conditions to become complicated. It is believed we were once apes which adapted into humans. Charles Darwin has a theory about survival of the fittest.
8 of 13
What is a scientific theory?
A scientific theory is where there has to be evidence, and if theres no proof its fait.
9 of 13
Give to reasons to why religion and science are in conflict?
1) Because the Genesis account and scientific accounts are completely different. 2) Science is about proof whearas religion is about faith.
10 of 13
Give two reasons to why religion and science co-exist?
1) Science tells us how something happens but religion tells us why, they both answer different questions. 2) Liberals allow for interpritations and translation errors: for example the world for day in the bible doesn't exactly translate to day.
11 of 13
Does humanity have a purpose? What would science say?
Scientists would say we don't have a purpose because they say there's probably not a god and were here by accident. They would say maybe its to reproduce or develop our understanding of science.
12 of 13
Does humanity have a purpose? What would Religion say?
Religion would say we all have a purpose. G
13 of 13

What did William Paley say about a watch and the world? (Creationism/Christianity)

What is the book of Genisis? 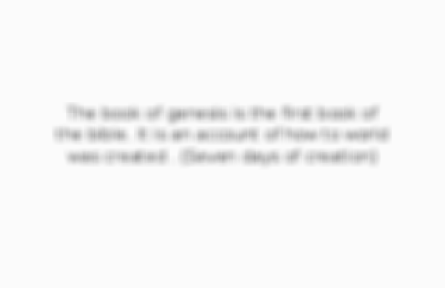 Name the seven days of creation? 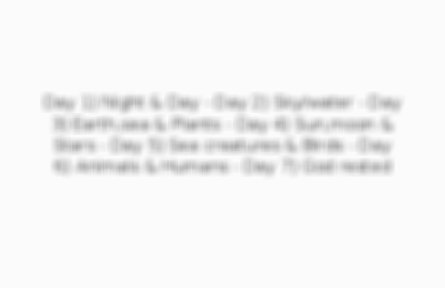 What would christians say about god? 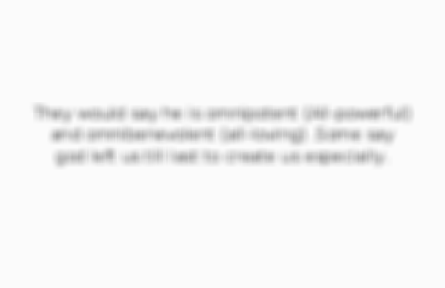