These are the metamporhic rocks you need to know about:

Metamorphic rocks are the result of pressure on pre-existing rocks causing recrystallisation to form new minerals.

The Rock record provides evidence of plate tectonics. For example, there are matching formations found in Eastern South Africa and Western Africa. This indicates that at one time, the continent was a single land mass.

Folding is caused by tectonic stress. Folding is when one or a stack of originally straight and flat surfaces are bent or curved. 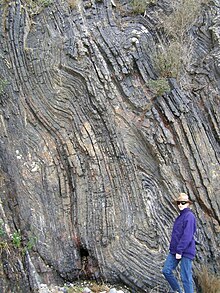 Folds are caused at a collision margin where two plates collide and force eachother upwards.

Faulting is caused by tectonic stress. 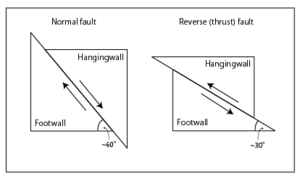 Faults are along a convergent plate boundary where one plate is moving faster than the other.

Unconformities are breaks in the rock record. For example, there is a period of time that is not represented by any rock in the sequence. Unconformities are formed by a sequence of events including deformation, uplift, erosion and later deposition.

Rocks can be dated by using fossils.

Fossils such as cephalopods and graptolites have morphological changes with time (they have evolved through time) so they can help us date more precisely.

The decay of radioactive material helps give us an absolute age of when the rock was formed.

Weathering is the break down of rocks in situ by chemical, biological and physical weathering.