Respiration takes place in every cell in the body, and it is the process of releasing energy from glucose. This chemical energy is used to do things like create large molecules and contract muscles. It can also be released as heat energy which maintains the body temperature.

Aerobic- Happens when there is plenty of oxygen, "with oxygen," and it is the most efficient way to release energy from glucose.

Anaerobic (in animals.) - When there is vigorous exercise and there isn't enough oxygen, despite the heart and breathing rate increasing. Therefore, the body releases less energy through anaerobic respiration. This way the glucose is partially broken down, forming lactic acid in muscles which is painful.

Anaerobic respiration in plants- Plants can respire without oxygen, but produce ethanol and carbon dioxide, not lactic acid. Fungi like yeast also do this:

PAPER TWO- Carbon dioxide produced from respiration can be detected by using hydrogen-carbonate solution. In the presence of carbon dioxide, the solution changes from orange to yellow. In this experiment, you could also use maggots, and the control would be glass beads.

1) soak some beans in water for a couple of days and they will begin to germinate. Therefore, they will start to respire.

2) Boil a similar number of beans, which will kill the beans and they will not be able to respire. THESE ARE THE CONTROL.

3) Put home hydrogen carbonate indicator into a test tube and place the beans on a platform made of gauze. Put in a bung, and leave for a set time. Do this for both types of beans, and the germinating beans will change the indicator, due to the carbon dioxide from respiration.

Measuring the heat produced by respiration

PAPER TWO- You can also use dried beans to measure the heat produced from respiration.

Prepare a batch of germinating and boiled (non-germinating) beans. Add each batch of beans to separate vacuum flasks, making sure that there is air in the flask so that the beans can respire aerobically.

Then place a thermometer into each flask and seal the top with cotton wool. Record the temperatures of the flasks, each day, for a week.

The adaptations of a leaf- efficient gas exchange.

1) Leaves are broad and wide, so they have a large surface area for efficient diffusion.

2) Leaves are also thin, so gases have a short diffusion distance to reach and leave the cells they need to.

3) There are also spaces between the cells in a leaf, which allow the exchanging of gases to happen easily , and increases the surface area for gas exchange.

The lower surface is full of little holes called stomata. They allow water to escape (transpiration), and allow gas diffusion.

The stoma (singular) closes at night, as there is limited light, and photosynthesis does not happen. When it is closed, the water cannot escape and the plant maintains moisture.

They also close when supplies of water from the roots are limited. This stops photosynthesis, and the plant might lose too much moisture.

The opening and closing is controlled by the guard cells that surround the stomata.

Add the same volume of the indicator to four boiling tubes. Put three similar sized leaves into three of the tubes, and seal them all with a bung. Wrap one of the leaf tubes with foil, an the other with gauze. Then, place all the tubes in bright light. Leave the tubes for an hour, then check the colour of the indicator.

There should be no change in the control tube. In the tube wrapped in foil, the indicator should turn yellow. This is because no light is entering, so the leaf will only respire, not photosynthesise. Therefore the carbon dioxide concentration would increase. In the tube wrapped in gauze, you would expect no change, as there are both processes happening. This means that similar volumes of carbon dioxide are being produced, as they are being used up. Finally, the tube exposed to strong lighting should turn the indicator purple. This is because there would be lots of photosynthesis, and the leaf would take in more carbon dioxide than it produced. Thus the concentration of carbon dioxide would be lower.

The respiratory system and Ventillation

The thorax is the top part of the body, and is separated from the lower part by the diaphragm. The lungs are surrounded by pleural membranes and are protected by the ribcage. The air that is breathed in travels down the trachea, and splits down the two bronchi (bronchus.) This air goes into each lung, and into the bronchioles. At the end of the bronchioles are alveoli where GAS EXCHANGE takes place.

Test the effect of exercise: Sit still for 5 minutes and then count the number of breath intakes in one minute. Then exercise for 4 minutes, and count your breaths in one minute. Get 3 people to do this. Exercise increases breathing rate, since your muscles are respiring, and there is a higher demand of oxygen.

The alveoli are adapted for their job. Firstly, the huge number of the gives the lungs an enormous surface area. They also have permeable, one cell thick walls, so that gases don't have far to diffuse/ can easily diffuse in and out of the blood. There is also a moist lining to the alveolus so that the gases can easily dissolve. Finally, the alveolus has good blood supply, and is in close contact with the blood vessels so there remains a high concentration gradient, and the gases diffuse quickly. 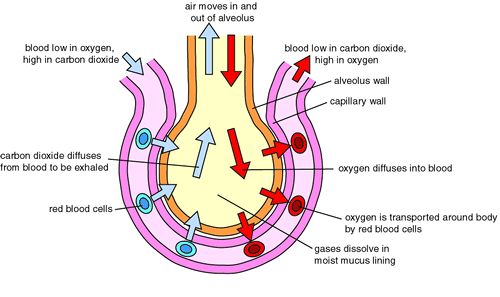 The risks of smoking tobacco

Smoking can damage the walls of the alveoli, reducing the surface area available for gas exchange and diffusion of gases. This therefore leads to diseases such as emphysema, where the sufferer finds they are often breathless, and that they have breathing difficulties.

The tar in cigarettes also damages the cilia in the lungs and trachea, stopping them from doing the job (working with mucus to catch dust and bacteria before it enters the lungs.) Due to the cilia being damaged, chest infections would be more likely.

In addition, tar irritates the bronchi and bronchioles, as a result more mucus is formed, however this cannot be cleared by the damaged cilia. This results in smoker's cough, and chronic bronchitis.

Carbon monoxide found in cigarettes also reduces the volume of oxygen the red blood cells can carry, since CARBOXYHEMOGLOBIN is formed on the red blood cell. Because of this, the heart rate increases, which increases blood pressure. Furthermore, this damages the artery walls and makes the occurance of blood clots more likely. This increases the risk of coronary heart disease,

Tobacco contains carcinogens, which are chemicals that can cause mutations/damage to the DNA of a cell. This then multiplies causing cancerous tissues.