The chances are you won't need this for an actual exam question, but it's useful to compare to.

Hippocrates and The Four Humours

The Four Humours was a theory that the body was made up of four fluids, and when these were unbalanced you became ill. To get yourself well again, you'd need to put your body into opposite conditions. Eg. if you were hot and wet, you had too much blood. The remedy would to be in dry and cold conditions. 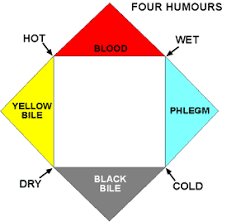 The Romans were very clean compared to those before them in history which reduced disease and sickness, but disease rates were still high because of huge population density.

Galen was a Greek born in AD129. Aged 16 he started studying medicine. He practiced as a surgeon at a gladiator's school to treat wounds, and he became famous when he travelled to Rome and was doctor to the Roman Emporer. He taught other doctors his knowledge.

He emphasised Hippocrates' methods of observation, diagnosis and prognosis.

Galen dissected human bodies in Alexandria for increased knowledge, however in Rome dissection was only allowed in animals, meaning some details were wrong; this is why he encouraged his students to dissect human corpses whenever possible.

Like Hippocrates he believed in the Four Humours, but expanded on them. He used "opposites" to balance them.

Galen wrote 60 books in his life, which combined Greek thoughts and his knowledge. However, most information in these were wrong, and consequently people believed these for 1500 years.

The Middle Ages were a time of decline for health, because the Roman way of life was eradicated. Disease became more common, and public health plummeted.

There was almost no thought of public health - open sewers, throwing excrement onto the streets, dirty water. In fact, most people drunk ale, as the water was so bad. Some monastries tried to keep clean, but that was about it.

The influence of Galen was still around, because it agreed with the Christian beliefs, which meant that for 1400 years, people were still treating sickness wrongly.

Medieval surgery wasn't regarded highly, so it was mostly done by barber surgeons. Antiseptics (wine) and anaesthetics(hemlock, opium and henbane) were tried out, but they weren't adopted. People didn't know that germs caused infection, so infection rates were high. There weren't really any doctors, so it was mostly "wise women", barber surgeons and physicians that treated the sick.

In 1300 corpses were used as teaching aids for dissection, which eventually brought the knowledge of anatomy back to the standard of the Romans.

The Bubonic plague killed around 1.5 million people in England, as well as millions more in Europe. It was called the Black Death because of the dark marks which formed around buboes. It's believed that the disease came from bacterium in fleas, which came to Europe from the Gobi Desert which jumped on by rats in Europe. Due to bad santitation and a lack of knowledge, many preventable deaths occured. Symptoms included buboes that filled with pus, delirium, high fever, vomiting, bleeding of the lungs, extreme fatigue and eventually death.

There is now a vaccine for the bubonic plague, however people believed:

Public Health in the Middle Ages

After the Romans were conquered, public health regressed. People had to drink ale to try to not get cholera and people dumped their excrement in the street, as only the rich had toilets (which were built over rivers).

The government knew there were problems regarding the lack of cleanliness and sanitation, but they couldn't afford to provide like the Romans did. Instead, they passed laws, like how it was compulsory to bathe 4 times a year. however the laws didn't work as they weren't reinforced.

Some private individuals contributed to the improvement of public health more than the government. For example, Alderotti advised daily stretching and the washing of face and teeth. Nobles took regular baths, as did those in monastries.

Hotel Dieu in Paris in the 7th century was the first hospital to care for sick people (although it was caring not curing). Other hospitals were build through donations, and were usually run by Benedictine Monks. In 1249 there were the first female nurses (which had to be 50 or over) at the Great Hospital of Norwich. Almhouses were created in the 14th century for the 'deserving' poor and old.

The Church's Influence in the Middle Ages

The Church's Influence in the Middle Ages

1400-1700. A period of rebirth, examining new ideas and questioning things.

-The body contained muscles and nerves

- Facts about different organs, like the liver not having lobes

- The heart's septum does not contain holes

- Humans had a single jaw bone

The Renaissance had a limited impact on the understanding and treatment of illnesses. Why?

Even though many discoveries from Versailius were made about anatomy, such as muscles, nerves and organ, he did not go into disease. He made treatments for bones easier, as he realised the sternum was made of 3 parts, not 7, and the jaw only 1. This meant that if broken, being set was easier. However, this didn't help the cause of diseases and sickness, and prevention wasn't achieved either.

The same thing goes for William Harvey. He made a lot of progress with blood, how it is produced by the liver and realted things such as a theory about capillaries (even though there was no proof at the time due to a limited range of technology). Yet again these discoveries didn't help the prevention of illnesses, as some discoveries still weren't fully understood.

Ambroise Pare was a French surgeon in Renaissance times who discovered a new way to treat war wounds and amputations. He spread his knowledge through books (Method of Treating Wounds, Les Ouvres etc )

When at war he ran out of oil to cauterize wounds, so he made a dressing out of rose oil, egg whites and turpentine. He observed his patients and realised that the soothing remedy was more successful that cauterization, as well as causing less pain.

Pare also used ligatures to tie off blood vessels after an amputation, as he realised it was more effective than using hot iron/oil to stem blood flow. Even though this was less painful and worked, his idea wasn't widely accepted by other surgeons, as they were complicated and could lead to infections which could cause death.

Ambroise Pare set up a school for midwives in Paris and taught them how to turn a baby around inside the womb.

He also disproved that a Bezoar Stone could cure all poisonings.

It differed from the Black Death because:

It was similar to the Black Death because:

The Great Plague made people scared, as they knew the effects of the previous Black Death. The plague brought many effects such as:

Death in the Industrial Revolution

Death in the Industrial Revolution:

If you were a labourter it was common to die in teen years. Middle and Upper Class people lived until around 30-35. A tradesman usually didn't live past 40. It was quite rare to live over 50.

People were dying because of:

Table showing 4 key diseases in the industrial revolution and whether urbanisation increased the spread of the illnesses. 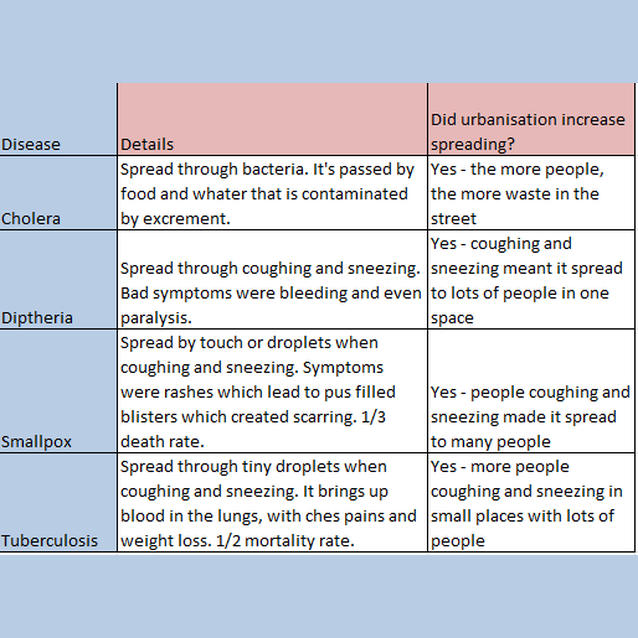 Jenner observed that milkmaids got cowpox, but never got smallpox. He decided to inject cowpox into a child and then injected smallpox. The child did not get ill. This was because the cowpox was a weaker straint of the smallpox disease, so the body was able to fight back against smallpox.

He tested again, each time on humans not animals, which was new at the time.

The government was interested in his work, as it showed that innoculations worked, at least for preventing smallpox. They gave him £10,000 for initial research, and later provided another £20,000. Jenner gave away his information as he was more concerned about people's health that his bank balance; this was the start of medical research for everybody's gain. The government paid for free innoculations for people, which showed the government thought it was important enough for everyone to receive. Eventually in 1872 the smallpox vaccination was compulsory, and in 1979 the World Health Organization announced smallpox was eradicated.

Robert Koch (from 1878 -1883 ) found a way of staining and growing bacteria in a petri dish. By doing this he discovered septicaemia, TB and cholera. Around the same time, difference scientists discovered typhoid, pneumonia and the plague.

Both Pasteur and Koch found causes and answers to disease around the same time (19th century). Both made massive progress in medical knowledge, as well as inspiring others, such as the invention of the combination microscope. They also both worked in teams.

However, Koch was a microbiologist and Pasteur was a chemist. They also came from different countries - France and Germany. Pasteur changed the food and drink industry, whereas Koch made advancement in the discovery and cure to disease.

In 1884 William Brockedon created a machine to make pills and tablets contain the same quantity of each ingredient and in the same sizes. These were then sold to pharmacies, not apothecaries.

Patent medicines were mass produced and recognisable brands. There were the same quanities in each medicine.

In Victorian times anyone could be a pharmacist, despite the dangerous chemicals (opium; cannabis) and strange ingredients (such as boiled earthworms).Most people were still vague om what caused sickness and disease. The working class couldn't really afford pharmaceuticals and the upper class went to a doctor.

Louis Pasteur greatly influenced Joseph Lister, due to Germ Theory. He concluded that preventions should happen to stop germs in the air getting into wounds. He cleaned the wound of a boy, and then gave him a dressing which was doused in carbolic acid, as he knew it was a disinfectant. The boy did not suffer from gangrene (as was common).

One day in the lab, Fleming accidentally discovered a mould on culture dishes. He noticed that the mould stopped the germs developing in that area.

It was identified as penicillin. Fleming used it on animals and there was no ill effect, and it cured a colleague's eye infection. Fleming had discovered the first antibiotic.

However, he did not have the funds to develop and produce his work, so at the time his findings had a limited impact. 10 years later, Florey and Chain created a team to develop penicillin, but unfortunately, due to the small amount of it available, it didn't last long. It kept people alive for a little while, but once it run out they died. It didn't build resistance.

It wasn't until WW2 when an American team mass produced penicillin that it became a drug. Up until this point the discoveries had a limited impact.

The NHS meant that:

However it also meant:

- Found in chromosomes, which are found in the nuclei of all cells except red blood cells.

Factors that led to the discovery of DNA

The electron microscope and X-Rays were needed before it could be discovered. Also, the information could be shared and stored on 5CD-ROMS rather than 80,000 books. This is why technology was fundamental to the discovery.