ionic bonding -  is the transfer of electrons.

sodium chloride : a sodium atom transfers its outer electron to a chlorine atom , giving it a positive sodium ion and a negative chlorine ion.

STRUCTURE: compounds with ionic bonding always have giant ionic structures. the ions are in a closely packed lattice arrangement by he attraction of the oppisitely charged ions.

the number of paired electrons determines the how many bonds it has. e.g. a nitrogen molecule has three shared pairs of electrons = a triple bond

STRUCTURE: Simple molecular - the atoms within the molecule are held together by very strong covalent bonds, but the force of attraction between the intermolecular forces are very weak. properties -:low melting/boiling point, usually a gas or a liquid at room temperature.

Giant covalent structure - all atoms are bonded to each other by strong covalent bond (no charged ions). there are lots of these bonds which means alot of energy is needed to break them.                properties-: high melting/boiling point, don't conduct electricity (except for graphite), insoluble in water.      Examples: graphite and diamond

Metallic bonding: metals are held together by metallic bonding. the attraction between the positive ions and the negatie electrons keeps the structure together.

STRUCTURE: metals have giant structures of positive ions surounded by a sea of delocalised (free) electrons.

The Collision Theory in rates of reaction:

For a chemical reaction to occur, the reactant particles must collide. But collisions with too little energy do not produce a reaction.

There are two ways to find the rate of a reaction:

factors effecting the rate of reaction:

4.Size of particles or surface area

The rate of a chemical reaction can be raised by increasing the surface area of a solid reactant. This is done by cutting the substance into small pieces, or grinding it into a powder.

If a solid reactant is broken into small pieces or ground into a powder:

measuring the rates of reaction: Catalyst

The faster the rate, the more reactant is used, or product is made, in a given time. The faster the reaction, the steeper the line on a graph showing total product against time will be.

3. The volume of gas given off

1. Energy must always be suplied to break bonds:

Energy must be suplied to break existing bonds ( give out energy)  - bond breaking is an endothermic process.The energy is usually transferred as heat energy, causing the reaction mixture and its surroundings to get colder. e.g:

Energy is released when new bonds are formed ( take in energy ) - bond formation is an exothermic process.The energy is usually transferred as heat energy, causing the reaction mixture and its surroundings to become hotter. e.g: 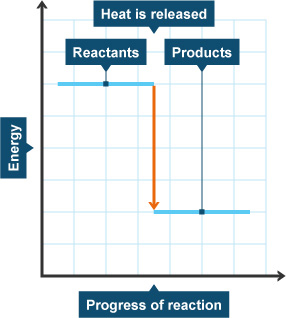 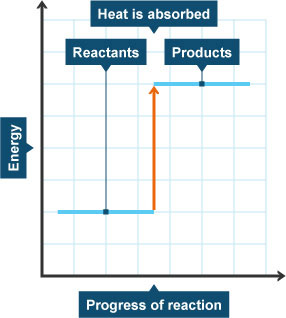