Home > A Level and IB > English Literature > What Influence has Milton had?
Fullscreen

THE LEGACY OF PARADISE LOST

When I first tried to read Paradise Lost, I remember being told (probably by Wikipedia) that it was an epic. I learnt that it was part of a great tradition including Homer, Virgil, Dante and Spenser, and that it frequently made references to these authors. Unfortunately, I didn't really know anything at all about epic writing, beyond what the notes at the back of the book could tell me. Even then, I didn't find it particularly helpful to know that the catalogue of fallen angels in Book I parodies lists of warriors in Homer. All the things I'd read that were closest to Milton had been written in response to his work, and what I found interesting was the way he'd inspired these later texts with which I was already familiar. 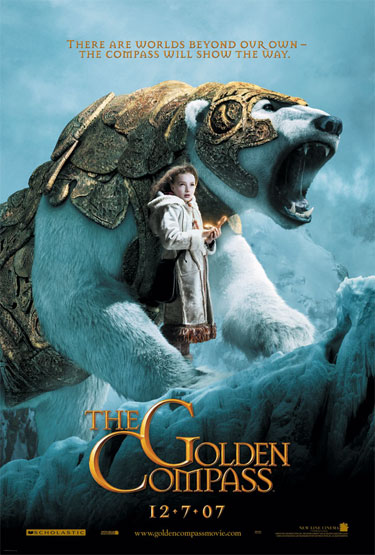 The Golden Compass (2007), film poster. A Hollywood film starring Nicole Kidman and Daniel Craig, based on the first novel of Philip Pullman's His Dark Materials trilogy.

The most obvious example of this was, of course, Philip Pullman's His Dark Materials trilogy (1995-2000). Pullman himself has said that his aim in writing His Dark Materials was to produce a version of Paradise Lost in three books for teenagers, and also that his method of characterization, in which individuals stand for abstract qualities, is modelled on Milton's work. Both works centre around an act of temptation - in Paradise Lost Satan is responsible for tempting Eve to sin, and at the end of Pullman's trilogy Mary Malone 'plays the serpent' and tempts Lyra.

Milton and Pullman share many of the same concerns: they are both preoccupied by authority and freedom, and how these ideals interact with God and religion. In both works, an original act of disobedience is responsible for bringing a new quality in the world - in Paradise Lost it is sin, and in His Dark Materials, Dust. It has been claimed that for Milton, the epitome of freedom involves (broadly speaking) abiding by Christian principles. However, for Pullman, God is a much more repressive, malign influence. Milton's God is a monarch, not a tyrant - he is a superior ruling over his inferiors, rather than someone unjustly raised above his peers (like Milton's Satan). Pullman's God is intentionally and irrefutably tyrannical. Of course, just how good Milton's God is has been widely debated by critics - whereas C. S. Lewis claims that Milton's work succeeds in its stated aim of justifying the ways of God to men, William Empson (Lewis' chief antagonist) has argued that Paradise Lost is good because it makes God look bad. Pullman's position in this debate is unequivocal; he says in his introduction, 'Blake said Milton was a true poet and of the Devil's party without knowing it. I am of the Devil's party and know it.'

Both Milton and Pullman also focus on knowledge and ignorance, and the ways in…