MILTON AND THE CRITICS:

The Reception of Paradise Lost

An inisght into the controvesy over paradise lost of the centries, this page covers the pivtiol role of satan as a hero and the morality of the book as a whole. 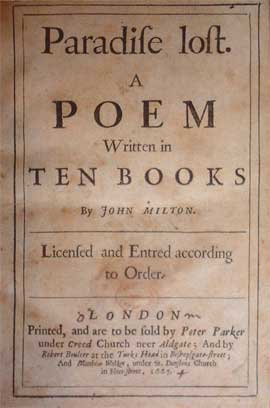 Title page to the first edition of Paradise Lost (1667).

In 1667 John Milton published Paradise Lost, perhaps the greatest long poem in the English language. It was recognised as an extraordinary achievement shortly after it appeared, and has, in the three hundred and fifty years that people have been reading and thinking about it, provoked a great deal of critical debate. Despite its current canonical status, a favourable reception for Paradise Lost in the late seventeenth century was no foregone conclusion, and its reputation has fluctuated surprisingly ever since.

With the restoration of the monarchy in 1660, Milton was out in the cold: as a staunch republican, a supporter of Cromwell and an apologist for the regicide, he was lucky to escape execution for treason. His unorthodox views on various sensitive subjects, including divorce (he was in favour) were well known: Milton was an active writer of political pamphlets as well as a poet, and he had many influential enemies. England in 1667 was reeling from the events of the previous year, when plague and fire had swept the capital, causing a devastation many people thought was divinely inspired; a biblical epic from a blind, grim old controversialist was by no means certain of being sympathetically received, as the poet's wish that his poem might 'fit audience find, though few' (VII.31) perhaps recognises. In spite of this unwelcoming climate, when Paradise Lost appeared, it was hailed as a work of genius, even by Milton's political opponents. The audience was not few, but was it fit?

From the start, this epic poem attracted a number of disobedient readers. One of the first major responses was an adaptation for the stage by John Dryden, The State of Innocence (1671). He sought and received Milton's permission to put Paradise Lostinto rhyme (unconvinced, presumably, by the comments on the 'troublesome and modern ******* of rhyming' in the note on the verse), and his version outsold the original until the end of the seventeenth century. Dryden's political affiliation (he was a royalist) prompted him to play on a crux in Milton's poem: Satan, who disdains servitude and tries to overturn his monarch, becomes in Dryden's rewriting an unmistakeable portrait of Oliver Cromwell, the king-killer. He also believed that the fallen angel, and not Adam, was the hero (in the sense of his structural position as the protagonist of the epic), and weighted his adaptation accordingly.

This was not an isolated instance of wishful interpretation. Contemporary readers who thought there was a whiff of sulphur about the unrepentant republican poet were not surprised to find these sentiments in the mouth of the arch-fiend; and there were those who believed that Milton was in…