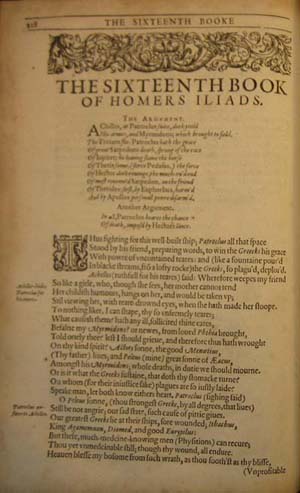 A rather often stated paradox about Milton is that, in creating one of the most seminal works in the English canon, he pushed the development of literature forward whilst looking backwards - to the Civil War, to his precedents in English epic, to the classics and ultimately to the Bible. The poem celebrates that which is lost in both subject-matter and Milton's use of language; like Spenser before him, he resuscitated archaic words, formed new Latin-sounding creations and wrote in a syntax and grammar that is convoluted, and has never been easy to read. It is comforting to think, when reading Paradise Lost, that generations of readers and critics before you have got lost in its verse-paragraphs, have struggled to identify where on earth the verb actually is. Because of its anachronism and highly 'poetic' style, T.S. Eliot famously described Paradise Lost as an undeniably great work that had, however, held back English poetry for years: even in the twentieth century, it represented 'an influence against which we still have to struggle'. Just as the poem confronts both the danger and the romance of revolution, it was forged from the influence of previous works into something at once new and reactionary, pushing forward whilst looking back.

Perhaps the most important of Milton's influences in writing Paradise Lost is the classical epic form. Milton was clearly interested in the investigation of classical genres and their relation to an English poetry still trying to decide where it stood: amongst the Greek and Roman classics, with the influential Italian and French literatures, or following the British vernacular tradition back to Chaucer and his contemporaries. Indeed, the first of the poem's invocations to the Muses seems almost hyperactive in its referencing, compressing together Milton's many influences:

Sing heavenly Muse, that on the secret top
Of Oreb, or of Sinai, didst inspire
That shepherd, who first taught the chosen seed,
In the beginning how the heavens and earth
Rose out of chaos: or if Sion hill
Delight thee more, and Siloa's brook that flowed
Fast by the oracle of God, I thence
Invoke thy aid to my advent'rous song,
That with no middle flight intends to soar
Above the Aonian mount, while it pursues
Things unattempted yet in prose or rhyme. (I.6-16)

The second line seems almost like a joke, a trick on the reader. Homer, Virgil, Dante, Chaucer and Spenser (amongst many others) all opened their epic poems with prayers for help from the Greek Muses, the goddesses who embodied and inspired the arts and those who practiced them. Whilst to later, Christian, poets there is always a hint of Christianity read anachronistically into these pagan invocations, Milton here catches the reader out by subverting convention and making it explicitly Christian: the 'secret top' is not of Parnassus, the home of the Muses, but…