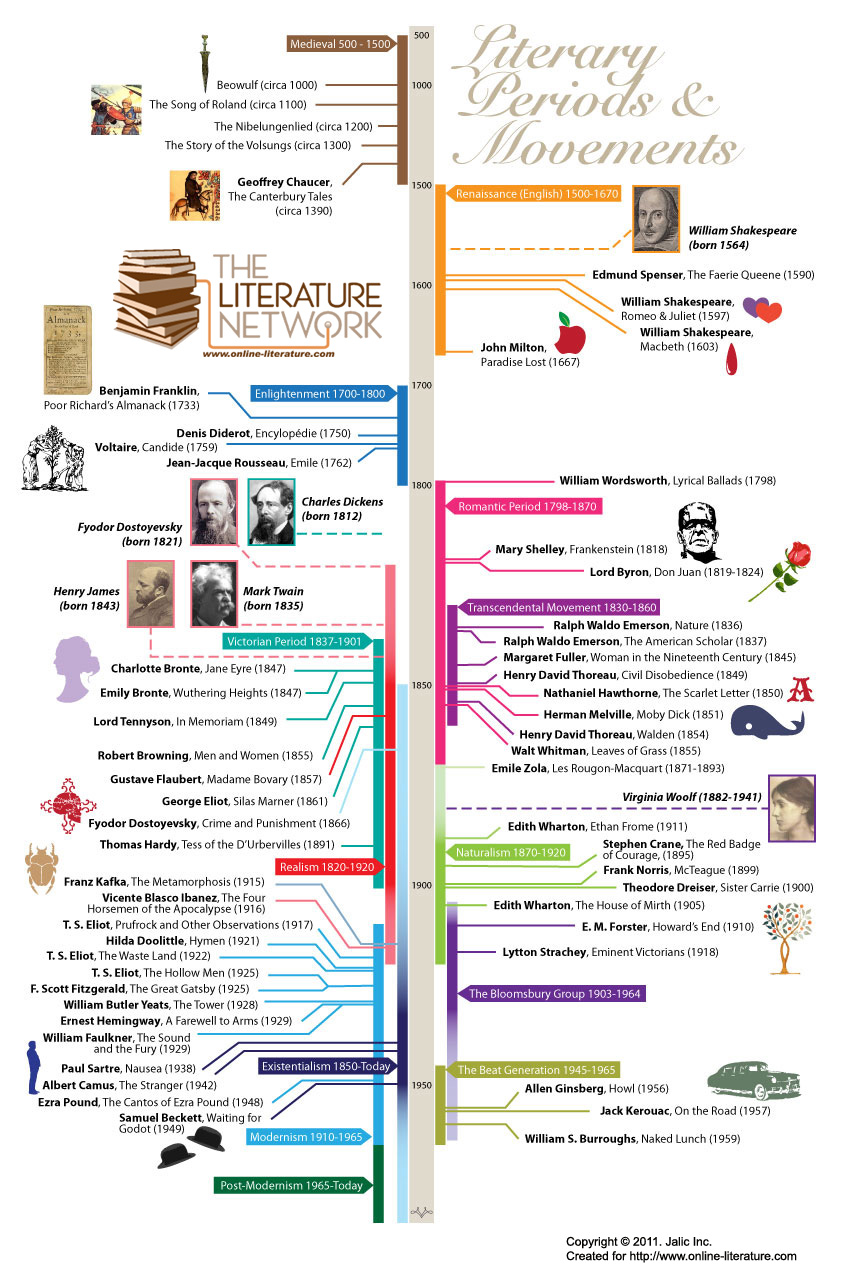 Richard II was the monarch from 1377 - 99, and the types of literature were Medieval and Gothic. The genres ranged from mystery and mortality plays to tales and epic prose. It is important to note that PROSE, as in books, were not around - poetry, such as epic poetry and Grecian plays were the main form of literature.  Key Authors in this period were Chaucer (1347-1400) and Malory (1400 - 71). It is also important to note that the English language at this time was hugely influenced by French, due to the French invasion. Chaucer's Canterbury Tales reflect this French influence.

Little love poetry: mainly based on EPIC/HEROIC battles or Religion (eg, based on the Clergy and Church.) MUCH emphasis on the bible, people used to read it all the time! In the mid 1600s, when Milton wrote Paradise Lost (a 'heroic' version of the bible, a little like a cinematic view of it) he was seen as sort of Blasphemic, but Paradise Lost basically offers another view on the literature that was around in medieval times.

Poetry was rarley used to convey feelings, and was simply like a word-of-mouth way to remember key events or stories. The language of poetry was really complex, as they thought poems should be filled with logic and reason.

Ruler was Henry VIII, and the main form of literature was in tradgedies, comedies, sonnets, classical verse and allegorical poetry (note the lack of 'books'!) This is a period of literature, where European literature was at its peak. European literature that began in Italy in the 14th century and spread around Europe around the 17th century. The impact of Renissance vaired in different countries - those who supported the Catholic church experienced it differently to those who were more Orthodox. It focused on self actualization and one's ability to accept what was going on in their life. The creation of the printing press encouraged writers to write in their local vernicular as oppose to Greek or Latin, widening audiences and promoting spread of Renissance ideas. It was a sort of 'awakening' from the Dark Ages, and everyone was really optimistic - humanism was a huge factor of the Renissance, which means 'rebirth.' Drama became very important and London playhouses were hugely popular. Masque and spectacle was also popular, and so was courtly love poetry. Monarchs themselves were writers!!! Note that most people reading/writing these texts would have been upper class, usually monarchy, because hardly anyone was literate.

It was really based on COURTLY LOVE, and heroic epics of the medieval time, were altered into LOVE tales, such as the ARTHURIAN legends.  As the Renaissance unfolded, lit and poetry evolved further. A more personal style developed, and poems clearly showed themselves as a way for the poet to reveal his feelins to the one he loved. They were still in EPIC style  (a really long poem, like Canterbury Tales/Paradise Lost etc, their…

Oh, Renaissance and Romantic are my favorite periods of literature. And your diagram is very useful, I think it will be easier to study all these periods with it. Here you can clearly see the main representatives, works and ideas.