Animal cells, which include human cells, contain five main features which carry out particular functions. These are:

Plant cells are very different to animal cells as they have different functions to fulfill, for example, they have to create their own food.They have all the same features as an animal cell and more including:

Bacteria are single-celled living organisms which are far smaller than animal and plant cells; most are less that 1um in length (um means micrometre). You can culture bacteria on agar jelly which creates a bacterial colony containing millions of bacteria cells. This is the only way you can see bacteria with the naked eye.

Bacterium cells have a cytoplasm surrounded by a cell membrane and a cell wall, however, they do not have a nucleus. Instead, the DNA is left as a long strand, often circular, that is found free in the cytoplasm. DNA is also found in plasmids, which are smaller circular rings of the genetic material. Protein strands, called flagella, help the cell to move and the cell is often in a slime capsule.

Conrary to popular belief, most bacteria cells are actually harmless although a few can cause disease. Many, however, are useful to us, for example, in food such as yoghurt and cheese.

Another useful single-celled organism is yeast which we commonly use for making bread and alcohol. Yeast cells do have a nucleus with the genetic material, as well as a cytoplasm, cell membrane and cell wall. Most of these cells are around 3-4um in size and they are able to reproduce by asexual budding which means  that the new cell grows attatched to the parent cell. When oxygen is plentiful, yeast cells use aerobic repiration in which they break down sugar for energy. However, when there is little oxygen available, yeast cells have the ability to respire anaerobically, in which ethanol, commonly known as alcohol is produced. This process is also known as fermentation. 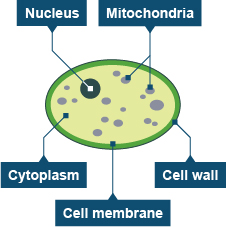 Some cells in the body can become specialised in order to carry out a particular function effectively.When this occurs, it is often the case that the cell will become unrecognisable from the…

Thank you so much for this Chloe, it's really helpful :) God bless you :)

Massive help! Thank you so much!

omg thank you so much