Stick on table from MS word

Scalar Quantity: A quantity which has magnitude but no direction

Vector Quantity: A quantity which has magnitude and direction

The length of the arrow represents the vector's magnitude, whilst its direction shows the direction of the vector.

Multiplying or dividing a vector by another vector can give a vector or scalar quantity.

Multiplying a vector by a scalar ALWAYS gives a vector

The resolution of vectors involves the generation of 2 equivalent vectors from a single vector, i.e. finding the horizontal and the vertical of a force at an angle.

The horizontal in this case is Fsinθ

Together these are known as the two components of the force

Instantaneous Speed: The speed at a given instant of time - it is the gradient of the graph of displacement against time at that instant

Instantaneous Velocity: The velocity of an object at a given moment in time

The gradient of a displacement-time graph represents velocity

An upward curve on a displacement-time graph represents acceleration

The gradient of a velocity-time graph represents acceleration

The area underneath a velocity-time graph represents displacement 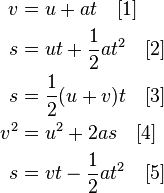 Learn how to derive these equations as well

Galileo is said to have measured the accleration of free fall by dropping balls from the top of the Leaning Tower of Pisa. Galileo discovered that the acceleration of free fall is the same for all objects, whatever their mass. Aristotle assumed, without experimenting, that heavier objects would fall faster than lighter objects.

It is different if an object is thrown. All of the horizontal measurements are the same, meaning that horizontal velocity remains constant. Vertical measurements gradually get larger, showing a downward acceleration.

An electromagnet supports a steel ball. When the current through the electromagnet is switched off, the ball starts to fall and simultaneously an electronic clock is triggered. The ball alls onto a trap door. When it breaks open the trap door, the clock is stopped. the distance that the ball drops is measured and the time, t, for the fall is taken from the clock. The experiement should be repeated several times. Work out the average to arrive at a final value for t. More readings can then be taken at different heights.

1. Electromagnet must ONLY JUST support ball; if the current is too high then there will be a  delay in releasing the ball after the clock has been triggered

2. If distance is too large/ball too small, air resistance will affect its speed

3.  Uncertainties when measuring the the distance of the ball. Should be bottom of the ball to the top of the trap door

Force and the Newton

Remember that forces causes acceleration, not the other way around.

F = ma is not valid at very high speeds because according to Einstein's Theory of Special Relativity, as an object approaches the speed of light, its mass increases.

One Newton: The force that causes a mass of one kilogram to have an accleration of one metre per second every second

Weight: The gravitational force on a body OR mass x acceleration of free fall (W = mg)

Drag: The resistive force which acts on a body when it moves through a fluid

Drag depends on several factors, including velocity, roughness of the surface, cross-sectional area and shape

Terminal Velocity: The velocity at which an object's drag equals its accelerating force. Therefore there is no resultant force and zero acceleration

When an object falls from a great height through the air, the drag on the object increases as it accelerates. Eventually the drag (upwards force) becomes equal to the weight of the object (downwards force) and so the resultant force on teh object is zero. It then travels at a constant velocity. This velocity is called the object's 'terminal velocity'.

Centre of gravity: The point at which the entire weight of an object can be seen to act

To find the centre of gravity of an object

Couple: A pair of equal and parallel but opposite forces, which tends to produce rotation only

Torque: One of the forces in a couple x perpendicular distance betweent the forces

The symbol for density is 'ρ', pronounced 'rho' and it has the unit kg m-3

The units for pressure are Pascals,

One Pascal: The force of 1N spread uniformly over an area of 1 m²

Braking Distance: The distance a vehicle travel while decelerating to a stop

Thinking Distance: The distance travelled from seeing the need to stop to applying the brakes

Crumple zones are parts of a car designed to collapse in a collision, increasing the distance over which the force is acting - passengers continue to move for 0.5m extra

Air bags consist of a nylon bag folded into the steering wheel/dashboard. When the front end of the spring in an accelerometer is stopped by an acceleration of around -10g, occurring only in an accident, the mass on the end of the spring continues to move forward, & hits a switch, igniting NaN3 and KNO3 to form N2 gas to fill the bag

GPS - Satellite A sends out a signal and it arrives after a known time at a GPS. Given the speed of electromagnetic radiation, the distance can be found. Receiver must be on circle X. This is repeated for satellite B, so must be at one of 2 intersections on X and Y. Once satellite C is used, the position of the receiver is found at point Z, intersecting with X and Y

Work and the Joule

Work: Force x Distance moved in the direction of the force

Work is measured in joules

1 Joule: The work done when a force of 1 newton moves its point of application 1 metre in the direction of the force

The Conservation of Energy

Energy: The stored ability to do work

Conservation of energy: Describes the situatino in any closed system, where energy may be converted from one form into another, but cannot be created or destroyed

Examples of energy in different forms

If F = ma, then W = mg. The gravitational potential energy lost in falling a distance, h, is:

By the law of the conservation of energy, kinetic energy should be equal to gravitational potential energy, provided air resistance is negligible:

Where v = speed and h = distance fallen to give:

Power and the Watt

Power: The rate of doing work

One watt: One joule per second

Elastic Deformation: The object will return to its original shape when the deforming force is removed

Plastic Deformation: The object will not return to its original shape when the deforming force is removed; it becomes permanently distorted

Tensile Forces: Usually 2 equal and opposite forces acting no a wire in order to stretch it. When both forces have the value T, the tensile force is also T, not 2T

Compressive Forces:Two or more forces that have the effect of reducing the volume of the object on which they are acting or reducing the length of a spring

An experiment to stretch a wire

A long thin copper wire is held in place in a clamp at one end. The other end supports a hanger weight after passing over a pulley. The hanger must be just heavy enough to keep the wire taut.

A marker is attached to the wire and a ruler is fixed in position below the marker. Gradually add mass to the weight (thereby increasing tension). Record the tension/N, reading on the ruler/mm and cumulative extension/mm.

Plot a graph of tension/N (Y) against extension/mm (X). The continual but slow increase in extension nearing the end of the experiment is known as 'creep'.

Graph should show a straight line followed by a curved section. The end of the straight line is known as the limit of proportionaility, and is very close to where the wire ceases to be elastic.

Hooke's Law: the extension of an elastic body is proportional to the force that causes it

In equation form, this is: F = kx, where F = force, x = extension and k is the force constant

Force constant is expressed in newtons per metre e.g. is k = 6 N mm-1, then it takes 6 newtons to cause an extension of 1 mm.

The experiment to measure tension against extension can be modified to find the Young modulus of the material of the wire. Length = length of wire section from clamp to marker. Area = area of cross section of the wire, calculated by measuring its diameter using a micrometer screw gauge.

F/x = gradient of the straight line part of the graph

- Extension can be measured more accurately using a travelling microscope

Ultimate Tensile Strength: The maximum tensile force that can be applied to an object before it breaks

Brittle: A material that distorts very little even when subject to a large stress and does not exhibit any plastic deformation e.g. concrete

Ductile: Materials that have a large plastic region (therefore they can be drawn into a wire) e.g. copper