What is a computer system?

a computer system is a system that has nothing more than an input, a processor and an output. Example:

Computer systems are integral parts of our lives and we use them on daily basis, for example:

Why do we use computer systems

Computer systems are integral parts of our lives and we use them on daily basis, for example:

Memory management- the OS manages the transfer of data between the CPU, RAM and main storage (e.g hard drive).

User Interface - the OS provides the user with a way of controlling the functions of the computer without resourcing to machine code.

Multi-tasking - The OS allows more than one program to be run at once so users can switch back and forth between applications easily.

Periphial management- The OS manages the input and output devices connected to the computer like keyboard, mouse and printer.

Security - The OS provides security features to restrict access to the system or particular files.

There are many types of Utility programs:

Off-the-shellf software is developed by a software company to be sold to the general public. The advantage: it's cheaper than developing it yourself and tech support's available the disadvantage is it's inflexibility it might not do everything you want it to do.

Open Source software is written by the general public for everyone else to use and source code provided so software can be tweaked. Advantage: allows anyone to adapt the software to meet their needs, disadvantage: it can be taken advantage of by people because of software installed on user's computers compromise security.

Proprietary: is written by a devleoper and allowed to be used by others but with certain restrictions. Advantage: proprietary can allow different versions of some software, disadvantage: source code cannot be inspected so it may contain malicious features within the software 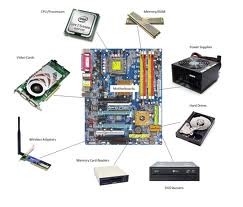 Inputs and outputs are the computers way of communicating with us - the user. Without inputs or outputs our system would be quite limited.

Here are some common input devices.

Here are some common output devices.

A CPU (Central processing unit)'s purpose is to fetch and execute instructions stored in memory. It acts as the brain of the computer and controls the rest of the system.

At the beginning of each cycle the CPU presents the value of the program counter on the address bus.

Characteristics which can affect a computer's perf

RAM and ROM are needed in a computer system but for different reasons. In a computer,Read Only Memory (ROM) is used to store all the instructions to get the computer up and running. Random Access Memory (RAM) is used as temporary storage for insructions and data between  the inputs, outputs, secondary storage and the CPU, the larger the RAM, the more instructions can be held in quick access memory without needing to use virtual mrmory.

Virtual Memory - Virtual memory stores the data that the RAM isn't actively using on the hard drive to free up the RAM .

Flash Memory - Flash memory is non-volatile and is used in usb memory sticks and memory cards for digital camera and games consoles.

Secondary Storage is needed for when we want to store files permanently or temporary. We might want to transfer files between computers by using portable secondary storage media.

Optical - codes data using microscopic dips on the surface of the disc.

Wait for 1 on either input before outputting a 1

Waits for 1 on both inputs before outputting a 1

To convert denary into binary,find the highest value that will go into it and then comtinue down the number of bits with the  remainder until there is nothiing remaining.

Programmers started to use hexadecimal to reduce mistakes and make it easier for them to understand than using lots of 0s and 1s.

To convert denary to hexadecimal you can divide the number by 16. For example, to convert 141 into hexadecimal do the following: 141/ 16 = 8 remainder 13, 8/16 = 0 remainder 8. Therefore, working from right to left,  the hexadecimal number is 8 13 (and 13 is represented as D  in hex) so it would be 8D. Alternatively, convert the denary number into binary and then binary to hexadecimal.

To convert binary to hexadecimal you need to break it down into nibbles (blocks of 4 bits).

An upper and lower case version of each letter is present in the chart to enable the computer to tell the difference between them. An ASCII format can have up to 255 characters represented in a character set.

Images on the computer are made up of lots individual pixels (small squares of colour). If you zoom into any image enough times you will see these little blocks of colour.

We can use binary numbers to represent each pixel. In a simple image, where there are only two colours (colour depth of 1) then we can simply use a 1 for colour and 0 for another.

That is the principle behind storing images as binary. However we also need to know a few other things about the image in order to display it correctly, i.e its height, width and colour depth.