Crude oil is a raw material extrcted for its economic value. Crude oil is essentially a mixture of many different compounds called hydrocarbons, all of varying lengths and complexities.In order to separate the individual components that make up the raw natural resource, the crude oil must be fractionally distillated so that the components can be removed one at a time according their boiling points, the diiferent segements are kown as fractions. 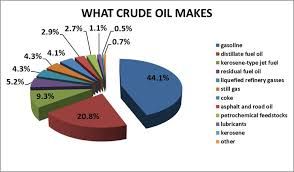 Alkenes are unsaturated hydrocarbons. They contain a double bond, which is shown as two lines between two of the carbon atoms. The presence of this double bond allows alkenes to react in ways that alkanes cannot. They can react with oxygen in the air, so they could be used as fuels. But they are more useful than that. They can be used to make ethanol - alcohol - and polymers - plastics - two crucial products in today's world.

Alkanes are saturated hydrocarbons. This means that their carbon atoms are joined to   each other by single bonds. This make them relatively unreactive, apart from burning or combustion, which is their reaction with oxygen in the air.

Equation for the complete combustion of  simple Alkanes (Balanced):

The pollutant is produced as a waste product.

Global warming is caused by a surplus of CO2 in the earth's atmosphere, this CO2 comes from burning fossil fuels. As the demand for fossil fuels increases more CO2 will continue to be released, until the supply inevitally run out. Most of the light energy from the sun is emitted in wavelengths shorter than 4,000 nanometers (.000004 meters).  The heat energy released from the earth, however, is released in wavelengths longer than 4,000 nanometers. Carbon dioxide doesn't absorb the energy from the sun, but it does absorb some of the heat energy released from the earth. When a molecule of carbon dioxide absorbs heat energy, it goes into an excited unstable state.  It can become stable again by releasing the energy it absorbed. Some of the released energy will go back to the earth and some will go out into space.  Overall this means the light levels will not be directly affected by CO2 levels, however the amount heat energy contained in the earth will increase, causing climate change and effecting weaher conditions. Currently, the amount of carbon dioxide in the atmosphere is increasing at the rate of about one part per million per year.  If this continues, some meteorologists expect that the average temperature of the earth will increase by about 2.5 degrees Celsius.Iit could be enough to cause glaciers to melt, which would cause coastal flooding.

Global dimming is due to particlatesin the clouds, these particulates are formed by incomplete comnustion when there is left over reactants, for example:

When factories burn coal, they give off CO2 and particulates,the particulates are the main cause of global dimming. The particulates get mixed up in the clouds, thickening their structure and causing the to reflect more light radiaton and decreases the particulate size of water droplets but not the total volume of the cloud, therefore increasing the amount of rainfall. As particulates increase the earth's iradiance will decrease.

Sulfur dioxide is a colourless, soluble gas that has a pungent smell. Sulfur dioxide is released from fossil fuels (present as an impurity), it rises into the troposphere, where it reacts with H2O (the water in the clouds) and forms sulfurous acid:

Sulfurous acid or acid rain causes problems such as:damaging buildings decreasing there life-span and asthetics. Acid rain that seeps into the ground can dissolve nutrients, such as magnesium and calcium, that trees need to be healthy. Acid rain also causes aluminium to be released into the soil, which makes it difficult for trees to take up water. It can harm river life as it releases aluminium into the river which is deadly to: phytoplankton, mayflies, rainbow trout, small mouth bass, frogs, spotted salamanders, crayfish, and other creatures that are part of the food web.

Relationship between Global dimming and warming.

Global dimming and gloal warming both retain some heat energy as at night the couds will act as an insulator containing the exothermic heat produced from the earth, and increase the earth's tempurature similar to global warming. However, at day it reflects light and some heat energy so the earth will lose heat energy.

Sulfur dioxide: Sulfur dioxide can be removed from waste gases after combustion of the fuel. This happens in power stations. The sulfur dioxide is treated with powdered limestone to form calcium sulfate. This can be used to make plasterboard for lining interior walls, so turning a harmful product into a useful one.

Biodiesel: Biodiesel is made from rapeseed oil and other plant oils. It can be used in diesel-powered vehicles without needing any modifications to the engine. They are useful as they contain large amounts of energy.

Bioethanol: Ethanol, C2H5OH, is not a hydrocarbon because it contains oxygen as well as hydrogen and carbon.  Bioethanol is made by fermenting sugars from sugar cane, wheat and other plants. It cannot be used on its own unless the engine is modified. However, modern petrol engines can use petrol containing up to 10 percent ethanol without needing any modifications, and most petrol sold in the UK contains ethanol.

Biofuels are a viable replacement for normal fuels as they release less pollutants, increase income for farmers, lower fuel price of both petrol fuels and bio fuels and are sustainable. However, some people are reluctant to use biofuels as petrol as many believe it would be more beneficial to use the crops grown to aid the poor, instead of petrol. They are not carbon nuetral as carbon is used in their production e.g. the pesticides used to protect crops.

However hydrogen seems to be one of th emost promising fuel options for the future as it only emits water in combustion and is renweable. 2H2+O2-->2H2O

Cracking is the thermal reduction of  a long-chain alkane, by heating it in the presence of a powdered catalyst (heated at 400C-700C). For it to work thought ht e akane has to be vapourised and passed through a long tube over the catalyst. the reaction will normally porduce an alkane and an alkene both of which have a shorter chain than the original. The process of cracking is useful as it allows to increase the efficiency, for example a long chain hydrocarbon with limited uses (as it  has a high viscosity, isn't not flammable and very dense which greatly limitates its potential)

Unsatrurated oils can be hydrogenated by adding hydrogen in the presence of a catalyst, at a room temperature of 60C. The process opens up the double bonds in the oil. This causes them to harden, as the new hydrogenated substance has a higher melting point. As completly hydrogenating makes the oils denser, it is common that the oils are only partially hydrogenated to make it a better consistency for spreading. It is primarly used as it increases the shelf-life of a product such as biscuts. However the only  problem with patially hydrogenated oils is; they have lots of trans fats which research suggest is very bad for you as they incrase blood cholesterol, and increases the risk of heart disease.

Emulsions are formed from to liquids, one of which is suspended within the other. In order to fully emulsify the mixture and emulsifier is added e.g. egg to sonflower oil and water = mayonnaise. The emusifier contains a hydrophobic and a hydrophilic, one end is attracted to oil and hates water (hydrophobic) while the other likes water and hates oil (hydrophilic). these prvent the emulsion from seperating ever. However some people are allergic ro the emulsifier.