Process: Volcani eruptions release large amounts of ash and Sulphur dioxide into the atmosphere. The ash can have the effect of refracting sunlightlight in the atmosphere and reducing the amount of solar energy that reaches the surface. Sulpur dioxide reactsin the atmosphere to form a persistent sulphuric acid, or an aerosol which again reflects sunlight back to the outer atmosphere, thus lessening the greenhouse effect.

Severity Factors: Not all volcanoes cause cooling, the more likely it is for the SO2 to reach the stratosphere, the higher the chance of cooling, so high latitude eruptions (where the tropopause is lower) or strongly explosive eruptions are more effective. The dispersal of the ash is key, if it is rained out of the atmosphere shorty after the eruption the effect will be less, if it gets into the atmospheric circulation system and travels around the globe it will be more

Pinatubo - 1991 - cooled the northern hemisphere climate by 0.5 degrees over a five year average. 20 million tonnes of SO2 released

Laki -1783 - This Icelandic volcano killed 50% of Icelandic livestock and 25% of the population releasing 8 Million tonnes of Hydrogen Flouride (deadly to livestock) and 120 Million tonnes of SO2, killing 23,000 in the UK from SO2 suffocation. The winter of 1783 was the coldest for some time and caused an additional 8000 deaths. Global cooling was estimated at 1 degree. (This is the deadliest eruption on record killing over 2 million people)

Asteroids with a 1 km (0.62 mi) diameter strike the Earth every 500,000 years on average.Large collisions – with 5 km (3 mi) objects – happen approximately once every ten million years. The last known impact of an object of 10 km (6 mi) or more in diameter was at the Cretaceous-Tertiary (K/T) mass extinction 65 million years ago (this is an energy release equivalent to 10 000 nuclear bombs), this event was significant enough to cause a nuclear winter (no sunlight reaching the surface) and a mass extinction which ended the Dinosaur era. A lack of sunlight is one of the key elements, as this effectively closed down the food chain on land. Thecrater for this event is found in Mexico, at Chicxulub on the Yucatan Peninsular. This has recently been voted on and accepted by the scientific community as the true cause for the extinction of the Dino's.

Severity Factors: How large the asteroid is, the bigger the worse, but luckily the less frequent.

Chicxulub- 65 mya led to the extinction of the dinosaurs and the impact was followed initially by a 2000ft tsunami, then by several months of darkness. There would have been significant earthquake activity. The estimates are that nothing larger than a chicken would have survived, land based life was decimated, with a 10-20% reduction in sunlight lasting for a decade at least

Tunguska 1908 - size unknown, but the comet/meteor exploded a few kilometers above the surfaceand wiped out 2150 square KM of forest and resembled a Nuclear blast

There is the 11 year sunspot cycle – not linked to long term climate change though. Only accurate data for the last 40 years from satellites but changes discovered so far are probably too small to account for climate change anyway. The difficulty in attributing any observed climate change to these variations in solar irradiance is that the latter are small in magnitude - a change of much less than 1% over the course of the sunspot cycle. Wigley (1988) stressed that with such small variations in the solar constant, the global climatic response would be no more than a 0.03°C temperature change. Nevertheless, many climatic records do appear, at least statistically, to display periodicity linked to one or both of the sunspot cycles . It should be clear, however, this does not prove cause and effect.

Severity Factors: Not many!

Examples: Sunspot cycles are thought to be related to solar magnetic variations, and a double magnetic cycle (approximately 22 years) can also be identified. What is of interest to a climatologist is whether the sunspot cycles are accompanied by variations in solar irradiance - the solar constant - which, potentially, could force clim.

This is an area of much research at the moment

Process: Milankovich theory dictates three known varibles of the earths passage around the sun. Precession is the 26000 year cycle,there are two elements to precession. The earths axis sweeps out a cone in space – this is axial precession and the elliptical orbit varies over time (like the furthest point of a hula hoop) this is Aspial Precession 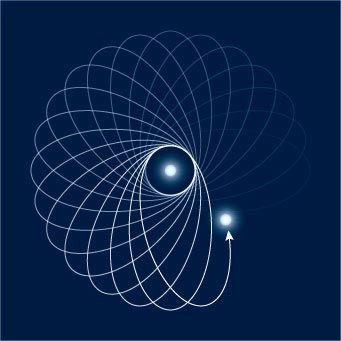 Due to the gravitational interaction of other planetary bodies in the solar system, primarily the Moon and the planet Jupiter, the perihelion (the point at which the Earth passes closest to the Sun) moves in space with a consequent shifting or precessing of the elliptical orbit. This phenomenon is known as the precession of the equinoxes, and effects the intensity of the seasons.

Process: The earth does not rotate around a vertical axis, but instead around an axis that currently rests at 23.4° relative to a perpendicular to the orbital plane of the Earth. Over a 41,000 year time period, this angle of inclination fluctuates between 22° and 24.5°, influencing the latitudinal distribution of solar radiation. 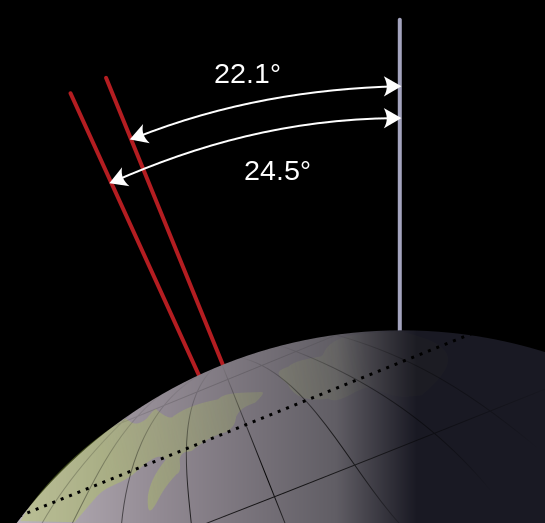 Explanation: Lower angles of obliquity create less seasonal variation, whereas higher angles increase the latitudinal temperature gradient and the intensity of the seasons

Effect: Obliquity does not influence the total amount of solar radiation received by the Earth, but affects the distribution of insolation in space and time. As obliquity increases, as in the angle of tilt increases, so does the amount of solar radiation received at high latitudes in summer, whilst insolation decreases in winter. This leads to the formation of permanent snow fields in the Northern Hemisphere winter which can prompt the development of ice caps

Changes in obliquity have little effect at low latitudes, since the strength of the effect decrease towards the equator. Consequently, variations in the Earth's axial tilt affect the strength of the latitudinal temperature gradient. This is why the location of landmasses is so important in Milankovich theory, and one of the reasons as to why the pace maker is not so clearly detected in older records, as when Pangea existed, the landmass was centered around the equator, which is not in the Milankovich sensitive latitudes.

Milankovich was a serbian astronomer who calculated that the earth did not move around the sun in perfect circles, but instead our orbit varies in three ways, which he called obliquity, precession and eccentricity.

Although his theories were not accepted at the time, they are now widely used in earth science and a trace record in sediments and ice displays a strong correlation with Milankovich over the last 600 000 years.

His theory focuses on how the varying distance/tilt we are from the sun affects global climate. He put foward the idea that when we are tipped furthest away, or our orbit is at itsmost elliptical we are more likely to experience an ice age. This theory highlights how the higher northern latitudes are "Milankovich sensitive", as the current continental configuration places the most land in the north, and ice will form more readily on land than on sea. He does not propose that this is the only cause, but is the main driving extrinsic factor (as in external to the earth system) but can be amplified by other intrinsic factors such as volcanoes and green house gas concentration.