CONTINENTAL FIT: some continents seem to fit together if placed beside each other. This is particulary true if continental shelves are taken into account.

GEOLOGICAL EVIDENCE:  rocks of the same age and type have been found on either sides of the atlantic. Also they have the same formation in south east Brazil and South Africa. Also trends in mountains suggest that they were once connected.

CLIMATOLOGICAL EVIDENCE: places as far apart as Antartica, the UK and Svarlbard all have similar coal deposits which would have been formed in tropical conditions. As they are no longer in a tropical position, it shows that they have drifted.

BIOLOGICAL EVIDENCE: similar fossil formations are found on either side of the Atlantic. For example, the same reptile remains, called Mesosaurus, is only found in south america and south africa, suggesting they were once connected. Plant remains from the humid swamps that later formed coal deposits have been found in Antartica and India.

1) Convection currents cause the continential plate to dome upwards

4) If the convection currents are strong enough, a line of volcanoes will form at the base of the valley, which will eventually form an ocean form.

OCEANIC/CONTINENTAL: due to oceanic crust being denser than continental curst, when plates collide the oceanic crust is subducted, which could cause major earthquakes if pressure builds up over a peroid. Destructive margins are the most seismically active.

OCEANIC/OCEANIC: where two pieces of oceanic plates are moving towards each other. The more denser or the quicker plate will be subducted. These plates are the main cause of island arcs which are just a trail of volcanoes caused by oceanic/oceanic subduction.

CONTINENTAL/CONTINENTAL: as an oceanic plate is being subducted, it forces two land masses to come together. As they have similar density so similar buyoncy, none are subducted but instead they collide. Volcanoes associated with earlier subduction and scraping of the ocean floor, build up to form fold mountains on the fault. Fold mountains are just a build up and pressure of small sediments.

The middle of the Pacific Ocean is the volcanic Hawaiian Islands that aren’t connected with any plate boundary normally associated with plate margins. The volcanoes are caused by a localised hotspot within the Pacific Plate.

The concentrations of radioactive elements inside the mantle cause the hotspot to develop, from this a plume of magma rises to eat into the plate above. Where lava breaks through to the surface, active volcanoes occur above the hotspot. Hotspot is stationary so as the Pacific plate moves over it a line of volcanoes is created.

One above the hotspot is active and the rest form a chain of extinct volcanoes. Hotspots are evidence that the Pacific plate is moving to the North-West.

BASALTIC LAVA: originate largely from the upward movement of mantle material. They are most common along spreading ridges but are also found at hot spots and within more developed rift systems.

RHYOLITIC LAVA: are most often found at destructive and collision margins.

Pyroclastic material comprises a wide range of volcanic fragments from finer-grained ash and lapilli to larger volcanic bombs. They are characteristic of more gaseous phases of eruption, where the build-up of has beneath blocked volcanic vents creates a violent explosion, shredding the magma into final particles.

FISSURE ERUPTIONS: occur where an elongated crack in the crust allows lava to spill out over a large area. It is basaltic rock and occurs mainly on rifts or early constructive margins. Eruptions are generally gentle and persistant.

SHIELD VOLCANOES: are made of basaltic rock and form gently sloping cones made from layers of ash and lava. It contains less viscous lava and basaltic rock. Found usally on hotspots or where oceanic meets oceanic. Eruptions are gentle and predictable.

COMPOSITE VOLCANOES: most common type of volcano found on land and are created by layers of ash from the initial explosive phases. The rock is andesitic and are found mainly on destuctive margins where they're explosive and unpredictable.

ACID OR DOME: steep sided volcanoes formed from very viscous lava. It has rhyolitic rock and is found on continental rock. Also its explosive and unpredictable.

GEYSERS/HOT SPRINGS: even in the areas where vulcanism does not produce active volcanoes, water heated at depth in the crust by magma chambers can periodically escape as steam and hot water. A geyser is an intermittent, turbulent discharge od superheated water ejected and accompanied by a vapour phase. Where hot water on its way upwards mixes with muds near the surface, a bubbling, boiling mud volcano may be formed. In some places, hot springs have become a tourist attraction.

FUMAROLES: are areas where superheated water transforms into steam as it condenses on the surface. These features are typical of areas such as Solfatara in Italy, where the escape of steam and water mixed with sulpher-rich gases gives rise to the collective name 'solfatara'. 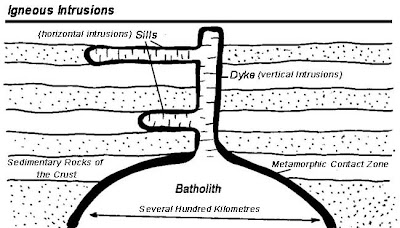 IMPACT OF THE EVENT:

EARTHQUAKES: occur when a build up of prssue over time is released which sends shockwaves through the earths surface causing the ground to shake violently. They occur almost continuously over the surface of the Earth. Theres only been 18 earthquakes which have regsistered 7.0 or over and these are the most deadily of earthqaukes; killing thousands

P-WAVES (PRIMARY): are te fastest waves and shake the waves backwards and forwards. These travel the fastest and move through solids and liquids

S-WAVES (SECONDARY): are slower and move with a sideways motion, shaking the earth at right angles to the directin of travel. They cannot pass through liquids but do more damage than primary waves.

SURFACE WAVES: these travel much nearer to the surface and more slowly than P or S waves but are mre destructive than either. They include long waves and cause the waves to move up and down. They also include Rayleigh waves.

FREQUENCY:  this varies between seismicaly active regions and seismic zones within the shield areas of ancient crust.

TSUNAMIS: enromous sea waves generated by disturbances on the sea floor. They are most often triggered by earthquakes and submarine landslides The most devastating recent example occured in December 2004 in Indonesia

LIQUEFACTION: where a violet distruption of the ground causes it to become liquid-like when strongly shaken. Such extreme shaking causes increased pore water pressure which reduces the effective stress, and therefore reduces the shear strength of the soil so it fails more easily.

LANDSLIDES/AVALANCHES: where slope failure occurs as a result of ground shaking and will cause serious consequences

HUMAN IMPACT: this covers a wide range of effects and depends upon population density and distance from the epicentre. Strong shaking of the ground can cause buildings, roads and bridges to collpase, and disruption to gas, electricity and water supplies. Others occur later as a result of the primary impacts

SEISMIC RECORDS: studying patterns of earthquakes and using these to predict the next event and its severity. Seismic chock waves and recorded on a seismometer or seismograph.

RADON GAS EMISSIONS: radon is an inert gas that is released from rocks such as granite at a faster rate when they are fractured by deformation.

GROUND WATER: deformation of the ground can cause water levels to rise (compression) or fall (tension) independently of atmospheric conditions

REMOTE SENSING: there is some evidence that electromagnetic disturbances in the atmosphere directly above areas about to have an earthquake can be detected

LOW FREQUENCY ELECTROMAGNETIC ACTIVITY: a sudden change in the ionospheric electron density and temperature was recorded a week before a 7.1 magnitude earthquake occured in southern Japan in September 2004

As earthquakes can't be prevented, some countries that are prone to them have a range of ways of reducing potential damage. For example:

NATURE OF THE SEISMIC HAZARD:

IMPACT OF THE TSUNAMI: