Unit 4 - How Atoms are Held Together

This section introduces the idea of covalent bonding, leading to molecules and chemical formulae.

Carbon exists in two giant forms which are very different: a) Diamond. b) Graphite.

Structures of Diamond and Graphite: 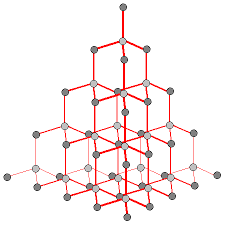 - (Diamond) This consists of strong covalent bonds.
Theses two forms are all called Allotropes (or polymorphs). They are different forms of the same element with different structures and different chemical properties.
Physical Properties: a) Very hard. b) High Melting Point. c) Does not conduct electricity.
Structure: It exists as one giant network,…

wow this is gr8 4 me just starting chemistry!