This process is used with thermoplastics to produce complex 3D shapes.

1. Plastic granules (and any other additives or colours) are placed in the hopper. The granue mixture falls through the hopper onto the Archimedean screw.
2. The screw is rotated via the motor and the gear box, moving the plastic towards the heaters where it softened to the point that it can be forced into the mould.
3. The hydraulic ram forces the softened polymer through a nozzle into the mould. Pressure from the ram ensures the cavity has been filled.
4. When the material has cooled and solidified, the mould halves are opened and ejector pins allow the product to be released. 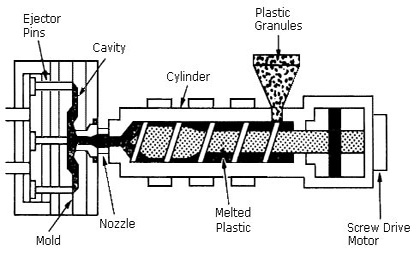 This process is used in the manufacture of bottles and other containers. Objects made in this way are usually hollow and have a narrow neck.

Products made using blow moulding have a hollow shape with one end sealed and one end open. The neck of the product is narrower than the main body and screw threads can be incorporated. Surface decorations can be applied. There is often a sprue at the bottom of the product and mould seam lines around the outside of the product. Rotational moulding is used in the manufacture of hollow 3D products, such as footballs, traffic cones and large storage tanks (up to 3m3 capacity).

1. Moulds are attached to the end of several arms, which are rotating constantly aside from at the start and the end of the process.
2. Moulds are filled with a precise weight of thermoplastic powder and clamped shut.
3. The moulds are rotated around an arm spindle and the whole arm is rotated towards a heate chamber where thermoplastic is heated to melting point. The continuous rotation ensures all of the mould is covered.
4. The mould is rotated towards a cooling chamber where the material is cooled.
5. The mould returns to starting position, the halves are separated and the product removed.

[+] One piece mouldings can be produced.
[+] Ideal for tough rigid shapes and also flexible ones.
[+] Large range of sized available, from large storage containers to small medical components.
[+] Surface textures can be applied to the finished products using the mould walls.
[+] Moulds tend to be cheaper than those for blow/injection moulding; no high pressure needed.
[+] Cheaper moulds allow for lower production runs.
[-]  Only hollow shapes can be produced in this way, more complex 3D shapes need injection or blow moulding.

Thermoforming is new and very similar to vacuum forming, however instead of relying solely on a vacuum to pull down the softened polymer, thermoforming uses an outer mould as well.

1. Sheet material is heated to just above softening point then held securely in a frame between the two mould halves.
2. The mould halves close and a vacuum is applied through the lower mould.
3. The upper mould ensures the correct amount of detail is applied.

[+] Low cost process.
[+] Good for smooth shapes with lots of detail.
[-]  Deep moulds result in thinning of wall thickness due to stretching.
[-]  Limited to simple designs.
[-]  Trimming is usually needed.

Products formed from thermo/vacuum forming are cut from sheet material; there are often marks showing where the product has been cut and removed from the sheet. The walls will be thinner than the base. Thermoformed products contain lots of detail that is sharper than that on vacuum formed products.

1. Thermoplastic powder is placed in the hopper, and falls onto a turning Archimedean screw, which pushes the plastic toward a heated section of the extruder.
2. Heaters soften the plastic and the screw forces it through the die.
3. On exiting the die, the material is cooled using a water jet.
4. The material is cut to the required length further along the production run.

[+] Usually a low cost process which requires simple dies.
[+] The arrangement of the machine means the dies can be altered for different products, for example when insulating wire it can be changed to allow the wire to pass through as the plastic coating is forced over it.
[-]  Can only produce cross-sectional shapes.

Calendaring is used in the production of thermoplastic sheet, film, coating materials and tape. Materials such as LDPE, PE, PVC, ABS and CA would be processed in this way. Calendaring involves rolling out a mass of mixed material between large rollers to form a continuous film of accurate thickness.

1. The rollers are heated to just above the softening point of the thermoplastic.
2. During the rolling process, and plastic 'dough' is forced through the gap roller, which determines the thickness of the sheet.
3. The final roller is the 'chill' roller which cools the material. Line bending is used to form small curved bends in thermoplastic materials. A ***** heater (comprised of an electric heater enclosed in a channel within a table) heats the material which is clamped above it at the point where it needs to be bent.

In some line bending arrangments heating elements can be placed on both sides to prevent the need to have to turn the material over.

Once heated to the required temperature the material can be bent. Accurate bends are achieved using bending jigs to ensure the correct angle is constantly being achieved.

Compression moulding is the most important moulding process for processing thermosets. A combination of heat, pressure and time is needed to ensure that all of the material's form and stucture changes.

1. A preformed compressed powder is placed between the mould halves.
2. The mould is hated to a temperature which will alow cross-links to form in the material.
3. The moould is help under pressure for the length of time sufficient to allow all of the cross-links to form.
4. When the process is finished, the product can be ejected whilst hot (doesn't need to be cooled because it's a thermoset therefore won't be soft) and the process can begin again.

[+] Moderately complex parts can be produced over long production runs.
[+] Start up costs are relatively low and moulds are less expensive than those used in injection moulding.
[+] Little waste material.
[-]  Necessary to maufacture a preform of compressed material.
[-]  Process is restricted to products with low complexity.