Alexandre-Emile Beguyer de Chancourtois had a better way of sorting elements - he showed similarities between every eighth element and produced a diagram to demonstrate it.

1869- Dmitri Mendeleev (the father of the modern  periodic table) placed elements in order of their atomic masses. After this he arranged them so that a periodic pattern in their physical and chemical properties could be seen.He left gaps for elemnts that had not yet been dicovered and predicted what their properties should be which were correct.

The chemical elements can be arranged in a periodic table. Within the table elements with similar properties are placed together. Like other chemists, Mendeleev listed elements in order of mass, but he realised that he needed to leave gaps for elements that had not yet been discovered.

Early versions of the periodic table were incorrect, one of the reasons being that not all the elements were known at that time however Mendeleev took account of unknown elements.

One problem with Mendeleev's table was that not all the elements next to each other behaved in the same way.

For example Argon has a bigger atomic mass then potassium so it should be placed after potassium with the reactive metals however argon is a noble gas so instead was placed before potassium. 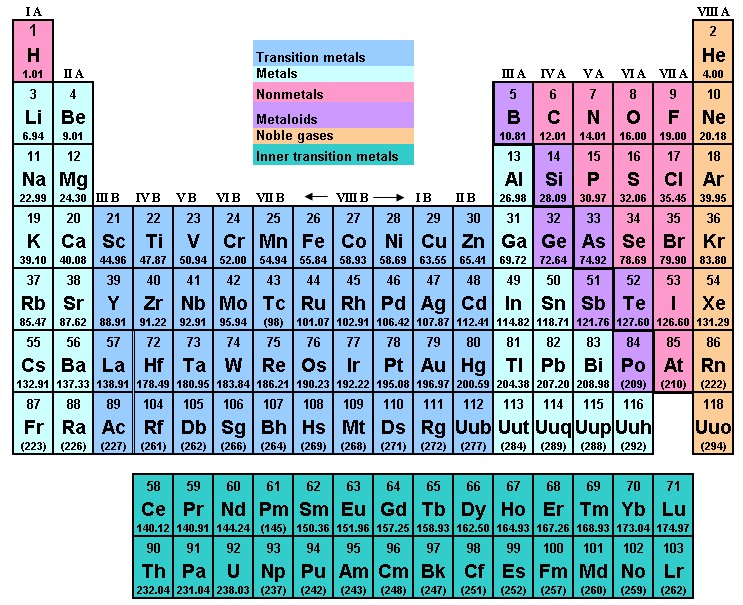 Elements are now arranged in order of their atomic (proton) number.

As the atoms get bigger the single electron in the outer energy level is attracted less strongly to the positive nucleus. This is because it is futher away from the nucleus- the outer electron is easier to lose.

The Periodic table shows elements arranged in order of their atomic number. Elements in a group all have similar properties because they have the same number of electrons in their outer energy level.