All material things are made from atoms. There are just over one hundred different types of atom, called elements. Atoms can join together in millions of different combinations to make all the substances on Earth and beyond.

Every atom is made of a nucleus consisting of protons and neutrons. The nucleus is surrounded by electrons. Protons and electrons are oppositely charged. Neutrons have no charge. This means the nucleus of an atom is always positively charged.

An atom has a neutral overall charge because it has the same number of electrons as protons.

Protons and neutrons have the same mass. Electrons have such a small mass that this can usually be taken as zero.

The atomic number is the number of protons in an atom. The elements are arranged in the periodic table in ascending order of atomic number.

The mass number of an atom is the total of protons plus neutrons. Atoms of the same element with different numbers of neutrons (and hence different mass numbers) are called isotopes of that element.

It tells us that a carbon atom has:

Six protons (because its proton number, at the bottom, is 6)

The symbol also tells us that the total number of protons and neutrons in a carbon atom is 12. Note that you can work out the number of neutrons from the mass number and atomic number. In this example, it is 12 - 6 = 6 neutrons.

Electrons are arranged in different shells around the nucleus. The innermost shell - or lowest energy shell - is filled first. Each succeeding shell can only hold a certain number of electrons before it becomes full. The innermost shell can hold a maximum of two electrons, the second shell a maximum of eight, and so on. This is called the 2,8,8 rule. 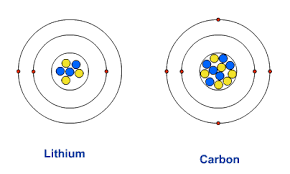