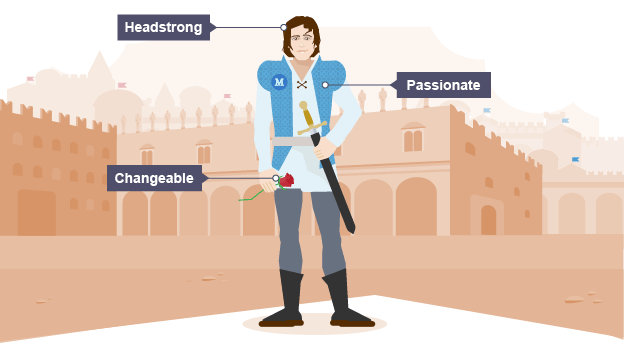 Romeo Montague is a young, passionate and headstrong teenager who thinks and acts with his emotions. When the audience first meets Romeo, he declares that he is in love with Rosaline. He states that he is heartbroken because Rosaline doesn't love him back. However, his emotions are changeable, as that very night, Romeo meets Juliet and falls in love with her instantly. He vows to marry her and they marry the next day, unbeknown to their feuding families.

As the play progresses, Romeo illustrates how passionate

he is by avenging his best friend Mercutio's, death. He kills Juliet's cousin, Tybalt, and is forced to leave the city of Verona. Romeo thinks he cannot live without Juliet and is devastated when he hears of Juliet's 'death'. Here, he takes his own life so he can be with his one true love in heaven.

How is Romeo like this?EvidenceAnalysis Passionate Romeo is passionate when he meets Juliet for the first time.…