The sailors were trapped in their ship on the windless ocean for some time, and eventually became delirious with thirst. One day, the Ancient Mariner noticed something approaching from the West. As it moved closer, the sailors realized it was a ship, but no one could cry out because their throats were dry and their lips badly sunburned. The Ancient Mariner bit his own arm and sipped the blood so that he could wet his mouth enough to cry out: "A sail! A sail!" Mysteriously, the approaching ship managed to turn its course to them, even though there was still no wind. Suddenly, it crossed the path of the setting sun, and its masts made the sun look as though it was imprisoned, "As if through a dungeon-grate he peered." The Ancient Mariner's initial joy turned to dread as he noticed that the ship was approaching menacingly quickly, and had sails that looked like cobwebs.

The ship came near enough for the Ancient Mariner to see who manned it:Death, embodied in a naked man, and The Night-mare Life-in-Death, embodied in a naked woman. The latter was eerily beautiful, with red lips, golden hair, and skin "as white as leprosy." Death and Life-in-Death were gambling with dice for the Ancient Mariner's soul, and Life-in-Death won. She whistled three times just as the last of the sun sank into the ocean; night fell in an instant, and the ghost ship sped away, though its crew's whispers could be heard long after it was out of sight. The crescent moon rose above the ship with "one bright star" just inside its bottom rim, and all at once, the sailors turned towards the Ancient Mariner and cursed him with their eyes. Then all two hundred of them dropped dead without a sound. The Ancient Mariner watched each sailor's soul zoom out of his body like the arrow he shot at the Albatross : "And every soul, it passed me by, / Like the whiz of my cross-bow!" 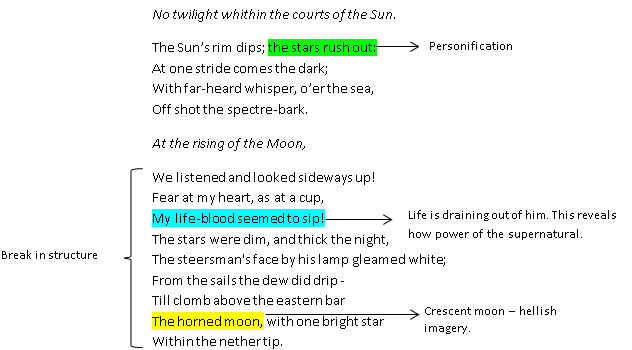 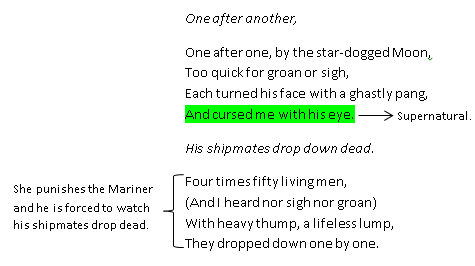