In the poem's first line, we meet its protagonist, "an ancient Mariner." He stops a Wedding Guest who is on his way to a wedding celebration. He tries to resist being stopped by the strange old man with the "long grey beard and glittering eye." Still, the Ancient Mariner takes his hand and begins his story. The Wedding Guest has no choice but to sit down on a rock to listen.

The Ancient Mariner explains that one clear and bright day, he set out sail on a ship full of happy seamen. They sailed and reached the equator. Suddenly, the sounds of the wedding interrupt the Ancient Mariner's story. The Wedding Guest beats his chest impatiently as the blushing bride enters the reception hall and music plays. However, he is compelled to continue listening to the Ancient Mariner, who goes on with his tale. As soon as the ship reached the equator, a terrible storm hit and forced the ship southwards. Then the sailors reached a calm patch of sea that was "wondrous cold". The sailors were the only living things in this frightening, enclosed world. Finally, an Albatross emerged from the mist, and the sailors revered it as a sign of good luck, as though it were a "Christian soul" sent by God to save them. The Albatross followed the ship for days, ate the food the sailors gave it, and played with them. The Ancient Mariner say's that he shot the Albatross with his crossbow. 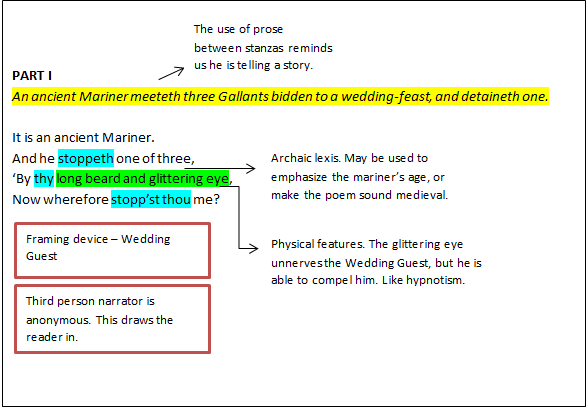 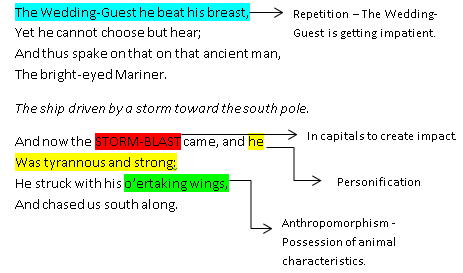 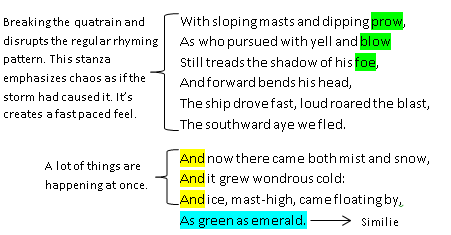 'An ancient Mariner meeteth three Gallants bidden to a wedding-feast, and detaineth one.' - this is not prose it is a section from the marginalia which was written to accompany the poem in order to make it more accessible