Home > A Level and IB > Economics > The foundations of economics (1.1)

Scarcity - the relative availability of a certain good or service in an area. For example cars may not be scarce, considering that there are a lot of them, but from an economic point of view, cars are relatively scarce as not everyone can buy one

Opportunity cost - when a person decides to buy something else than what they originally wanted. For example, if a man goes into a store to buy a jacket, and decides he needs a sweater instead, the sweater then has an opportunity cost. The money that he did not spend on the jacket is the opportunity cost

Ceteris paribus - "all other things being equal". This is a term used by economist when it is needed to measure the effect on one variable on another. When doing this, it is necessary to assume that everything else stays the same. For example, when measuring how a change in wages will effect people's desire to work, it is necessary to assume that there is no change in other factors, such as taxes

What should be produced and in what quantities? Producers have to consider scarcity of resources before they can decide how much they wish to produce one product. Also how how is demand for the individual good (see 1.2)

How should things be produced? Firms needs to decide which way they wish to produce their products, as there are different types of production (such as manual labor and production lines).

Who should things be produced for? The firms also needs to find their market consumer, meaning that they need to decide which demographic they are producing a certain good for, so that they can market the product properly

There are 4 factors to production:

Land - this includes different factors, such as resource endowment and production of crops and such

Labor - physical and mental contribution of a workforce

Capital - comes in the form of investments in both physical (stocks, factories, machinery roads and tools) and human capital (comes through education and health care - read section 4 concerning development)

These curves uses concepts of scarcity, choice and opportunity cost, and others. It shows the maximum number of goods and services which can be produced at any time. In order to increase production in one good, they may need to use factors from other productions 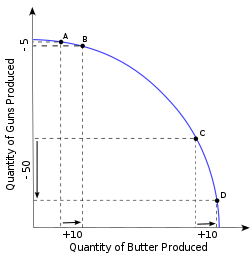 Measures the usefulness and pleasure of a good or service. It is measured in two ways:

Macroeconomics - has a wider view of economics, measures all economic activity in an economy

Normative statements - a matter of opinion, and can not be proven right or wrong

Rationing can be important as an economy is relatively scarce. In theory there are two main rationing systems:

Planned economies - decisions regarding production and who to produce for is decided by a central body (government). Some countries that have used, or still uses planned economies includes; USSR and China

Free market economies - there is a minimal government intervention  to production. Production and sales are privately decided within the firm or producers

Most countries has a mixed economy, as government intervention is an essential part of an economy. Through indirect taxes (for example on cigarettes) and other measures the government stays a part of the markets

Economic growth - when a country has the potential to increase their GDP. This is best measured in real level of output.

To have a sustainable economic growth, there need to be invested in recycling and renewable energy for instance