You can only see when your eyes absorb electromagnetic radiation called light.

Some of what we see are light sources. They emit light, often by glowing hot.

Everything else reflects light. Black objects don't reflect much light, they mostly absorb it. Shiney objects reflect most of the light that falls on them.

Light is one part of the electromagnetic spectrum.

All waves in the spectrum transmit through a vaccum at the speed of light.

The energy of a wave in the spectrum increases with frequency. Waves with higher frequencies carry more energy.

Solar cells produce electricity. They absorb electromagnetic radiation from the sun and transfer this energy to electrical energy.

The energy absorbed in each second from an electromagnetic wave depends on its intensity. This depends on:

The energy of a wave is spread out over an increasing area as it moves away from the source.

This means that the intensity of the wave decreases with increasing distance from its source.

The intensity of an electromagnetic wave is the energy transferred to each square metre of absorbing surface each second. The units of intensity are therefore J/m^2/ S

The distance of a wave in its vaccum is inversely proportional to the square of its distance from its source.

If the wave is partially absorbed by the medium it is passing through, the intensity drops even more rapidly than an inverse square law. 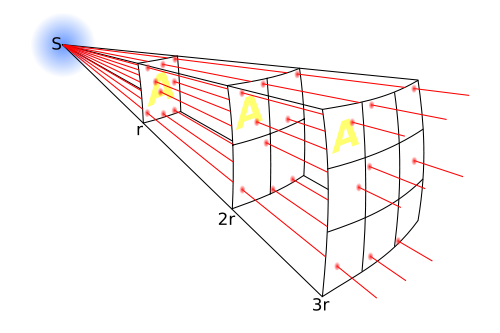 Atoms and molecules have no overall electric . Electrons are negatively charged. Ions have either positive or negative charge.

Atoms or molecules are ionised when they lose electrons.

The photons of an ionising radiation have enough energy to ionise atoms or molecules.

The only ionising radiations in the electromagnetic spectrum are high energy ultraviolet, X-rays and gamma rays.

Ionisation of a molecule can start off a chemical reaction involving that molecule.

X-rays pass through muscle but are absorbed by bone.

Cells are ionised and damaged when they absorb gamma rays or X-rays. The damaged cells can either die or develop into cancer.

X-rays are absorbed by dense materials, so X-rays are used to make shadow pictures of peoples bones or their luggage.

Hospital workers such as radiographers are protected from ionising radiation by lead and concrete screens.

Things which absorb radiation heat up.

Cells which absorb radiation are damaged if they get too hot.

You can increase the thermal energy transferred from radiation by increasing its exposure time and intensity.

Water molecules are good at transferring energy in microwaves to thermal energy.

As the water absorbs the microwaves they vibrate more and share this energy with other molecules around them.

Cells contain water so heat up when they absorb microwaves.

Microwave ovens can only be used to heat up food which contains water. Microwaves reflect off the metal in the walls and door or are absorbed by them instead of escaping. This protects people from radiation.

Mobile phone networks use low intensity microwaves. The heating effect of these microwaves is very small, but some people are concerned about the health risks from the radiation.

The risk of cell damage from mobile phones is measured by comparing cancer rates in people who do and do not use mobile phones.

There is no evidence of harm from mobile phone use.

Sunscreens and clothing protect people by absorbing ultraviolet radiation emitted by the sun.

If the ozone layer thins by 1%, the rick of skin cancer increases by about 4%.

Ultraviolet radiation from the sun causes chemical changes to molecules in the ozone layer.

Radiation from the sun contains a range of frequencies. Only some of these frequencies pass through the atmosphere of Earth.

The Earth warms up when it absorbs radiation from the sun.

The infrared radiation emitted by the Earth makes it cool down. Radiation from the Earth may pass into space, reflect off clouds or radiate back from gases which absorb it.

When the Earths radiation is absorbed or reflected back, this keeps the Earth warmer. We call this the greenhouse effect.

Everything emits some electromagnetic radiation with a range of frequencies.

The principal frequency of that radiation is the one with the greatest intensity.

The prinicipal frequency increases with temperature.

Carbon dioxide in the atmosphere

Carbon is found in all living things. It is constantly recycled through the carbon cycle.

Carbon dioxide in the atmosphere is found in very small amounts. It is absorbed by plants through photosynthesis and released by living organisms as they rot and respire.

Carbon dioxide is one of the main greenhouse gases found in the Earths atmorphere.

Carbon dioxide in the atmosphere

In the last 200 years the level of carbon dioxide in the atmosphere has steadily increased beecause:

The recent increase in temperature of Earth correlates with the rise in carbon dioxide levels. Many scientists believe this correlation is caused by carbon dioxide beacuse it is a greenhouse gas.

The greenhouse effect is slowly increase the average temperature worldwide. This is global warming.

Global warming has many effects including; changes to the crops which can grow in a region, floods or low lying land due to rises of sea level as the sea expands and glaciers melt.

Various gases are responsible for the greebhouse effect:

Scientists use computer models to predict the effects of global warming. The models are tested by seeing if they can use past data to predict todays climate.

Models suggest that global warming will result in more extreme weather events because of:

Some electromagnetic waves can carry information from one place to another. That information includes text, voice, music and pictures.

Radiowaves and microwaves are not absorbed by air. This means that they can carry radio and tv broadcasts through the atmosphere.

Infrared and light are not easily absorbed by glass of optical fibres. This means that they can be used for long-distance telephone and internet communication.

Optical fibre: A thin glass fibre through which light can be transmitted.

Radiowaves use a carrier wave to transfer information. The information is used to change the amplitude or frequency of the carrier, in a process called modulation.

A radio receiver demodulates the carrier wave to recover the information.

Modulation which varies the amplitude of a radio wave continuously make analogue signals.

A digital signal has only a few values. The digital code for sending sound or pictures has only two values, called 1 and 0.

By contrast, analogue signals are those which vary continuously.

Analogue signals, such as sound, can be sent by radio wave in a digital code:

Radio recievers use the strings of 1s and 0s in the digital signal to recover (decode) the original analogue signal and produce a copy of it.

Radiowaves can be affected by unwanted information called noise. Noise changes the amplitude of the carrier continuously.

Noise always reduces the quality of the signal recovered by an analogue reciever, because the original signal cannot be separated from the noise.

The wave pulses which carry information can usually be separated from the continuously varying noise in a digital reciever, so the quality of the signal is not affected.

Digital information is stored as bytes.

Digital information builds up images from very small dots called pixals. The colous and brightness of each pixal is set by binary digits.

Increasing the number of binary digits for a picture increases the sharpness of the image.

Digital information builds up sound from a rapid series of values called samples. The value of each sample is set by binary digits.

Increasing the number of binary digits for a sound increases its quality.

An advantage of using digital signals is that they are easily stored in electronic memories. So can be processed by computers.