Taxis- directional movement in response to a stimulus.

Kinesis- non-directional (random) movement in response to a stimulus.

Tropisms- A growth movement of a plant in response to a directional stimulus  in its environment. 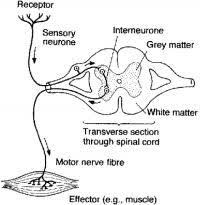 Pacinian Corpuscle: When pacinian corpuscle is stimulated, the corpuscle is deformed and presses on a sensory nerve ending. This opens stretch-mediated sodium channels in sensory neurones cell membrane. This allows sodium ions to diffuse into cell, creating a generator potential.

Receptors are specific and only detect one particular stimulus.Receptors in the nervous system convert the energy of the stimulus into the electrical energy used by neurones, this is called a generator potential(cell membrane becomes excited and more permeable, allowing more ions to move in/out of the cell- altering the potential difference). 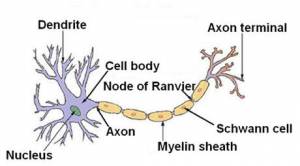 Motor neurone: transmit nerve impulse to an effector such as a gland or muscle.

2. Axon diameter: Action potentials are conducted quicker along axons with bigger diameters as there is less resistance to flow of ions than in cytoplasm of smaller axon.

Under a microscope a myofibril will have dark (myosin) and light (actin) bands.

Cycle lasts 28 days in humans. It is a cycle of physiological changes in which the female body prepares for reproduction.

Genes: sections of DNA found on chromosomes. Genes code for proteins (polypeptides). Order of bases in gene determines order of amino acids. Each amino acid is coded for by sequence of three bases (triplet) in a gene. Sequence of bases in a section of DNA is a template that is used to make a protein during protein synthesis.

DNA molecules found in nucleus of cell. Ribosomes synthesise proteins and are found in cytoplasm.

Transcription is the first stage of protein synthesis. An mRNA copy of a gene is made in the nucleus:

2. Complementary mRNA is formed- RNA poolymerase lines up free nucleotides alongside template strand. T base replaced by U. Once RNA nucleotides have paired up with their specific bases on the DNA strand they are joined together, forming an mRNA molecule

4. mRNA leaves nucleus- when RNA polymerase reaches a particular of sequence of DNA called a "stop signal", it stops making mRNA and detaches from DNA. mRNA moves out through the nucleus through a nuclear pore and attaches to a ribosome in the cytoplasm

Translation is the second stage of protein synthesis. It takes place at ribosomes in the cytoplasm. During translation, amino acids are joined together by a ribosome to make a polypeptide chain (protein):

1. mRNA attaches itself to ribosome and tRNA molecules carry amino acids to the ribosome.

3. The two amino acids attached to the tRNA molecules are joined by a peptide bond. The first         tRNA molecule moves away, leaving its amino acid behind.

Nonsence Mutation- change of a base result in the formation of a 'stop' codon.

Mis-sence Mutation- change of a base results in a new codon being formed.

Silent Mutation- change in a base that results in no change to the codon formed.

Deletion Mutation- when a base is deleted from a sequence, causing a'frame-shift'.

Causes of Mutation: radiation, chemicals that alter DNA structure or interfere with transcription.

All cells contain the same DNA but in different cells different genes are expresses or 'switched-on'. some genes may be permanently switched on or off or only temporarily expresses or not.

In Vivo Cloning (use of vectors)

Recombinant DNA: Produces organisms which have been transformed to benefit humans.

Involves altering defective genes (how depends on whether its caused by a dominant or recessive allele) by new alleles are inserted using vectors e.g. plasmids.

Used to find human diseases are caused by gene mutations e,g. Sickle cell anemia (caused by mutation of heamoglobin gene, alters shape of red blood cells & makes them concave).  However people who have this mutation are protected from malaria -> advantageous in Africa where its common.

Genomes contain repetitive non coding sequences of DNA, different for each person, these can be compared to other individuals to determine genetic relationship. Used in forensic science and medical diagnosis.

this is pretty good