Home > A Level and IB > History > The arms race
What did the Gaither Report, 1957 come as a result of?
The assumption that the USSR was more advanced than America at the start of the 1960s. Khrushchev used to falsely boast about his achievements & the US believed him.
1 of 30
What did the Gaither Report call for?
Massive increases in the military budget, particularly an accelerated programme of missile construction. But Eisenhower, a fiscal conservative, was reluctant to commit to the tremendously increased military budget. He did increase funding for ICBM
2 of 30
What did the Gaither report suggest?
The danger was serious & citizens couldn't be protected; America were scared of being destructed.
3 of 30
How did the Moscow Air show, 1955 show evidence that the Soviet were not superior?
The identifying numbers on the planes were painted out so that they could do several flypasts in front of foreign guests & give the illusion that the USSR possessed more of them than they actually did.
4 of 30
How were the USSR's ICBM's less impressive than what first seemed?
The early missiles were very unreliable & unsustainable for operational use, as Khrushchev knew. By the 1960s the USSR only possessed 4 ICBMS that were functional.
5 of 30
What did information from U2 spy planes confirm?
That the USSR were doing absoultely nothing! Khrushchev didn't want open skies because he couldn't live up to his boasting.
6 of 30
When did USA develop the first submarine launched ballistic missile?
July 1960.
7 of 30
How many missile warheads did USA have compared to USSR's by 1962?
USA had 4,000 missile warheads whilst USSR had 220.
8 of 30
What was Cuba like under Fulgencio Batista?
He was a brutal dictator & the people were turning against him. Cuba was a playing ground for America; they owned a lot of land & industry there.
9 of 30
What were the positive effects of Castro's takeover in Cuba, January 1959?
Example of order: no murder, no crimes; Health & education reforms; Nationalised land owned by USA & gave it to the people.
10 of 30
What were the negative effects of Castro's takeover in Cuba, January 1959?
500 people from former regime tried & executed; Thousands fled to exile in USA, in fear; Castro declares Cuba communist.
11 of 30
What did Russia offer Castro & Cuba?
Cheaper oil, financial & military help.
12 of 30
What did America do in response to this?
America struck their sugar trade with cuba by 95% & refused to refine Cuba's oil (USA still owned oil refineries in Cuba)
13 of 30
What did Castro do to USA industries?
Nationalised over a billion of USA's industries in Cuba, including oil refineries.
14 of 30
What did USA do in response to this?
USA stop trade with Cuba (trade embargo) & trained Cuban exiles to bomb Cuban sugar fields.
15 of 30
What did Kennedy agree to?
The CIA plan to invade Cuba, as long as no-one found out America was involved.
16 of 30
What was the outcome of the American bombing raid of 1961?
American bomber planes disguised as cuban planes; tried to destroy air force but only 3 cuban bombers destroyed & 7 civilians died; Castro announced revolution was socialist.
17 of 30
What was the Bay of Pigs invasion?
Consisted of less than 1,500 Cuban exiles, supported by CIA. After 74 hours, the exiles were all captured or dead.
18 of 30
Why did Khrushchev send nuclear missiles to Cuba?
To safeguard the security of the communist bloc; saw soviet missiles in Cuba as a reasonable counter-measure to the newly installed American missiles in Turkey, a country with a land border with USSR; Castro asked for Soviet Support.
19 of 30
What options died Kennedy have regarding the Cuban missile crisis?
Immediate military action/a surgical air strike; a blockade of Soviet ships going to Cuba.
20 of 30
What was Kennedy's decision?
A quarantine zone around Cuba. US forces were placed on high alert: 54 bombers, each with 4 nuclear warheads were on standby; 150 ICBMs aimed at the USSR were aimed & nuclear polaris submarines were put to sea.
21 of 30
What were Kennedy's options now?
Immediate invasion of Cuba to destroy ballistic missiles; agree to remove all missiles from Cuba & never invade Cuba again or withdraw US missiles from Turkey.
22 of 30
What was Kennedy's decision?
He publically accepted the first message & ignored the second. Bobby Kennedy secretly informed Soviet contacts that missiles would be withdrawn from Turkey.
23 of 30
What were the positive consequences of the Cuban Missile Crisis for America?
Kennedy seen as powerful: negotiated & won over the Russians; Americans get what they want: missiles out of Cuba!
24 of 30
What were the negative consequences of the Cuban Missile Crisis for America?
Relationship with Cuba still hostile & communist & Castro remains! Kennedy did not retaliate when one of his spy planes was shot down over Cuba.
25 of 30
What were the consequences of the Cuban Missile Crisis for Russia?
Khrushchev's reputation becomes damaged: appears weak, backed down to America; Khrushchev took no action when US spy plan strayed into soviet air space.
26 of 30
What was the longterm impact on Super power relations?
Detente; Nuclear Test Ban Treaty, 1963 & Hotline telephone link.
27 of 30
What was the Hotline telephone link?
A system of direct communication between the leaders of the USA & USSR; aimed to prevent misunderstanding during a crisis.
28 of 30
What was the Nuclear Test Ban Treaty, 1963?
A treaty that banned the testing of nuclear weapons above ground & below water. Signed by USA, Britain & USSR.
29 of 30
What was Detente?
A term used to describe the improvement in Superpower relations that existed after the Cuban Missile Crisis.
30 of 30

What did the Gaither Report call for?

Massive increases in the military budget, particularly an accelerated programme of missile construction. But Eisenhower, a fiscal conservative, was reluctant to commit to the tremendously increased military budget. He did increase funding for ICBM

What did the Gaither report suggest? 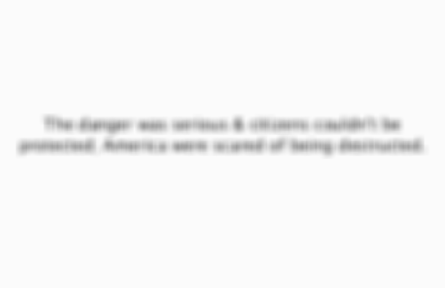 How did the Moscow Air show, 1955 show evidence that the Soviet were not superior? 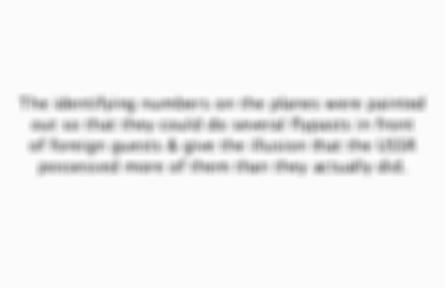 How were the USSR's ICBM's less impressive than what first seemed? 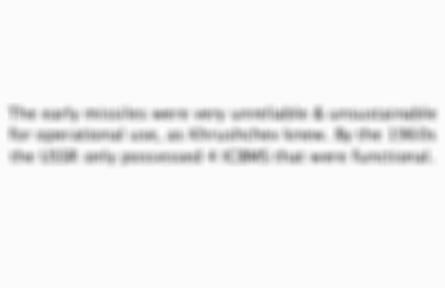