Home > A Level and IB > History > Personality Cults
What was the purpose of the much more extensive, 'Cult of Stalin'?
Emphasised Stalin's legitimacy to take over leadership of the Party- Stalin was fit to rule because he was a heroic genius. The cult also created a figure that soviet citizens could respect and even worship. Stalin exempt from criticism.
1 of 16
What was the 'myth of two leaders'?
Led soviet people to believe that the October revolution, victory in the civil war and the foundation of the soviet union had been masterminded by a duumvirate consisting of Lenin and Stalin
2 of 16
How was soviet history rewritten to validate the 'myth of two leaders'?
publication in 1938 of two histories of the CP, both edited by Stalin, socialist realist paintings which showed Stalin working closely with Lenin, altering photographs where Trotsky and other former leaders were pictured with Lenin.
3 of 16
How was the 'cult of stalin' used to show that Stalin was continuing on the path created by Lenin?
Painters used a variety of techniques to show that Stalin was Lenin's true heir- Grigory Shegal's 'leader, teacher, friend' shows Stalin standing in front of a bust of Lenin.
4 of 16
What was the 'vozhd' and what was its significance for the 'cult of stalin'?
It means leader. The term is significant because unlike words like 'prime minister' and 'president', vozhd has no legal significance. Thus, the powers of the vozhd has no legal limit. Turned Stalin into an infallible and celebrated figure.
5 of 16
How was Stalin's role as Generalissimo used by Soviet propaganda?
Increased emphasis on Stalin as a military figure and genius, instead of as revolutionary/thinker. He was presented as saviour of the nation who heroically defeated hitler. Painted from 1945 in his white, generalissimo uniform.
6 of 16
In what way was stalin's cult of personality more like a cult of impersonality?
The cult gave away very little about Stalin's history or character - focused more on the heroic side of the regime, rather than on Stalin as an individual
7 of 16
How was the cult of personality used by Khrushchev?
He criticised Stalin's cult but established two of his own; revived the cult of lenin and made his own by 1958.
8 of 16
How was the 'cult of lenin' revived by Khrushchev?
The cult of lenin in the 1950s was based on the slogan 'Lenin lives!'. Lenin depicted as a humane person, rather like Khrushchev. Used to move away from Stalinism, reminding citizens that the gov was founded on Lenin's revolution, not Stalin's terror
9 of 16
How was Khrushchev depicted by Soviet propaganda?
Disciple of lenin who was completing the journey lenin had started, responsible for success in space race and virgin lands scheme, respected + diplomatic statesman, hero of WW2, authority on arts, science, industry and agriculture, GREAT REFORMER
10 of 16
Why did the 'cult of Khrushchev' become problematic in the 1960s?
By associating himself so strongly with the virgin lands scheme he was seriously damaged by its failure, claim to expertise damaged by failure of corn campaign, embarrassing foreign policy climb downs and failure to deliver on optimistic promises
11 of 16
Why did Brezhnev adopt a cult of personality?
For pragmatic reasons. A cult of the leader was now well established in soviet politics. Brezhnev wanted to consolidate his position and help stabilise the regime.
12 of 16
What were the 4 key aspects of Brezhnev's cult of personality?
A great leninist (continuing the work of lenin), military hero (publications emphasised his prowess in WW2, position of marshall in Red Army), dedicated to ensuring world peace (esp. with USA), a true man of the people (humble origins and worker)
13 of 16
How did Brezhnev construct his image through a series of public festivals marking important anniversaries?
e.g at 50th anniversary of October revolution in 1967 and Brezhnev's major birthdays speeches by Brezhnev dominated these occasions and photographs of the leader were an important part of press coverage of these occasions
14 of 16
Why was the Brezhnev Cult counterproductive?
He was mocked for his claims to greatness. Veterans of WW2 resented the inflation of his role in the war, young people unconvinced by his claims to be an advocate of peace, his lavish and luxurious lifestyle showed that he was not a man of the people
15 of 16
What was the difference between the cult of Stalin and Brezhnev?
Brezhnev's cult was implausable. Whereas Stalin had been respected and feared, Brezhnev became the **** of numerous jokes that focused on his vanity and hollow claims. Stalins cult=loyalty and respect Brezhnev's=cynicism
16 of 16

What was the 'myth of two leaders'?

Led soviet people to believe that the October revolution, victory in the civil war and the foundation of the soviet union had been masterminded by a duumvirate consisting of Lenin and Stalin

How was soviet history rewritten to validate the 'myth of two leaders'? 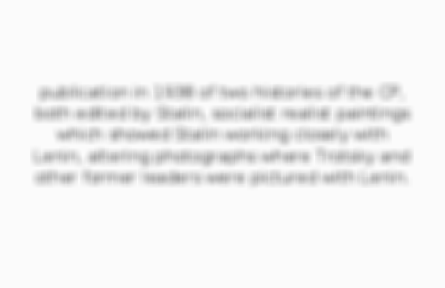 How was the 'cult of stalin' used to show that Stalin was continuing on the path created by Lenin? 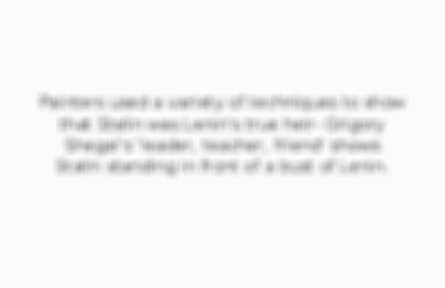 What was the 'vozhd' and what was its significance for the 'cult of stalin'? 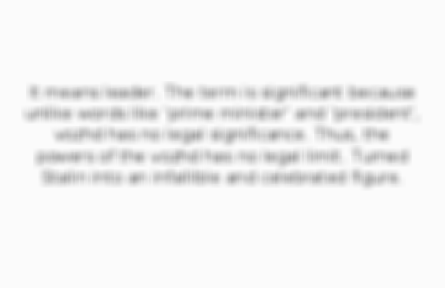