Home > GCSE > History > OCR GCSE History - The Cold War and America
Explain why the USA introduced the Marshall Plan
to minimise the spread of communism, to increase trade and as a reaction to Soviet Expansion
1 of 30
Explain why the Soviet Union blockaded West Berlin in 1948
They were unhappy about the economic recovery in West Berlin, the formation of trizonia, and the establishment of the Truman Doctrine, Marshall Aid, Comecon and Cominform
2 of 30
Explain why the West was suspicious of the USSR from 1945 to 1947
Soviet expansion, they were a communist country and Stalin didn't run free and fair elections
3 of 30
Explain why the Soviet Union's blockade of Berlin failed in 1949
airlift supplies, Stalin gave up, and none of the parties involved wanted to start a war
4 of 30
Explain why Eastern Europe was largely in the hands of the USSR by 1946
Soviet sphere of influence, rigged elections, The Red Army
5 of 30
Explain why there was continuing tension over Berlin, 1945-49
Berlin blockade, trizonia was formed (united against the USSR), the East didn't want economic recovery because of their buffer zone
6 of 30
Explain why the wartime alliance broke down 1945-47
Marshall plan, Soviet expansion, USA's A-Bomb was kept a secret
7 of 30
Explain how Eastern Europe turned communist from 1945-47
Soviet sphere of influence, banned the monarchy, rigged elections
8 of 30
Explain why Kennedy could claim victory in the Cuban Missile Crisis
missiles were removed from Cuba, Kennedy's reputation was increased, and Kenndy refused to remove the naval blockade
9 of 30
Explain why the failure of the Bay of Pigs invasion caused problems for the USA
Cuba accepted aid from the USSR, Kennedy seemed like a weak leader, Cuba became suspicious of the USA
10 of 30
Explain why the Bay of Pigs invasion failed
the operation wasn't kept a secret, the soldiers didn't know the terrain well enough, and there was a lack of support from the Cuban general public
11 of 30
Explain why Kennedy blockaded Cuba
to prevent the spread of communism, to stop missiles reaching Cuba, and to protect the USA from a possible attack
12 of 30
Explain why Khrushchev sent missiles to Cuba in 1962
he was worried about NATO missiles in Turkey (the Arm's Race), he could directly target the USA, and he wanted to spread communism and protect Cuba
13 of 30
Explain why America was involved in Vietnam
Truman Doctrine and Marshall Aid, Red Scare, Domino Theory, Gulf of Tonkin incident
14 of 30
Explain why the USA found it impossible to defeat the Vietcong
they were 'hanging on the US belts' so USA couldn't use air artillery, Vietcong had extensive underground tunnel system, guerrilla tactics
15 of 30
Explain why the Vietnam war became increasingly unpopular with the US public
media coverage, too many lives lost, the fighting took place so far away from the US that the public couldn't see how it benefitted them
16 of 30
Explain why the communists used guerrilla tactics in the Vietnam war
low cost fighting style, American troops feared them, Americans couldn't kill them without harming innocent civillians
17 of 30
Explain why America withdrew from Vietnam
anti-war protests, Vietcong's foreign aid, and the amount of money that was being spent on 'useless' weapons
18 of 30
Explain why American farmers faced problems during the 1920s
the dustbowl, overproduction, tarriffs (couldn't export surplus goods), mechanisation, loans couldn't be repaid
19 of 30
Explain the causes of the Wall Street Crash
buying on the margin, speculators pushed the prices up, falling demand for consumer goods (saturated market), the laissez-faire attitude
20 of 30
Explain why some Americans didn't benefit from the government's economic policy in the 1920s
Fordney-McCumber Tarriff Act (1922), overproduction, laissez-faire attitude
21 of 30
Explain why there was opposition to the New Deal
Father Coughlin claimed there wasn't enough support for the poor, Huey Long said that wealth wasn't distributed enough, supreme court claimed that it was unconstitutional
22 of 30
Explain why prohibition failed
alcohol industry would provide many with jobs, it was an opportunity to gain tax on alcohol, it was a waste of money trying to enforce the laws (needed in other areas)
23 of 30
Explain why the lifestyle of some women changed in the 1920s
work was more readily available so they became more independent, their appearances changed (flapper girls), divorce rates rose
24 of 30
Explain why many farmers did not share in the economic prosperity of the 1920s
they were encouraged by the government to overproduce, prices were lowered and farmers' profit decreased, had to share their land to earn money to pay back loans, sharecroppers
25 of 30
Explain why the economy boomed in 1920s America
new industries and products, increased government involvement, wages and credit (more disposable income)
26 of 30
Explain the weaknesses in the US economy in the 1920s
low prices for agricultural products, unregulated stock speculation, tarriffs
27 of 30
Explain why prohibition was introduced
it already existed in some states, WWI, campaigners and moral reasons
28 of 30
Explain why Roosevelt won the 1932 election
he was already a successful governor of New York, he gave American citizens hope, his opponent, Hoover, was associated with the Great Depression
29 of 30
Explain how the New Deal was designed to solve the Great Depression
helped farmers (AAA), gave the unemployed jobs (FERA + CCC), solved the banking crisis
30 of 30

Explain why the Soviet Union blockaded West Berlin in 1948

They were unhappy about the economic recovery in West Berlin, the formation of trizonia, and the establishment of the Truman Doctrine, Marshall Aid, Comecon and Cominform 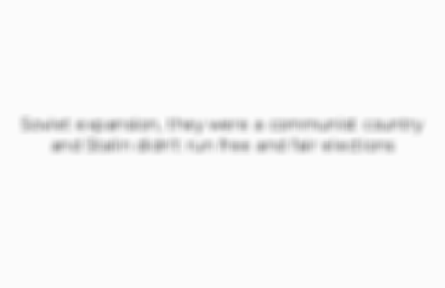 Explain why the Soviet Union's blockade of Berlin failed in 1949 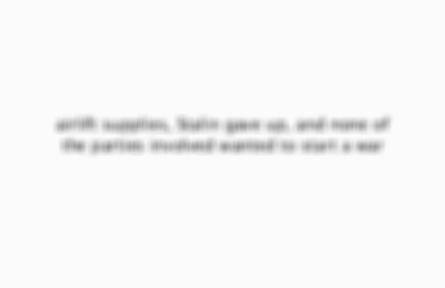 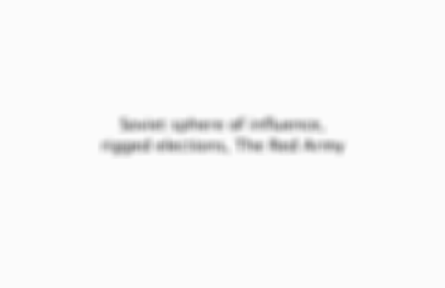