Home > A Level and IB > History > July Days
Why did the July Days happen?
Lenin believed the authority of the Provisional Government was hugely weakened by the failure of the 'june offensive. Lenin believed the Bolsheviks were ready for a bid to power.
1 of 8
What happened on Monday 2nd July 1917?
Petrograd- concert for soldiers leaving for the front turned into an anti- government rally. Demans for all political power to the Soviet. Troops returned to barracks formed a Provisional Revolutionary Committee to campaign against the government
2 of 8
What happened on Tuesday 3rd July 1917?
Machine gunners sent to all major Petrograd factories and military units. Afternoon- thousands of workers/ soldiers in streets- gathered at key buildings in Petrograd- crowd lacked leadership. Demanded transfer of power.
3 of 8
What effect did 3rd July 1917 have on Russia?
United provisional government and Soviet- Bolsheviks didn't have majority in Soviet; many other parties didn't trust them. Both asked workers not demonstrate. Bolsheviks a threat to authority. Some soldiers sided with demonstrators.
4 of 8
What happened on Wednesday 4th July 1917?
Bolsheviks had infiltrated factory committees- encourage demonstrations from inside. clashes with police. 50,000 armed people surrounded Tauride Palace waiting to occupy it- no order came- storm that night = crowd dispersed
5 of 8
What happened on Thursday 5th July 1917?
Cabinet of the Provisional Government sent loyal troops from the Front back to Petrograd to restore order = won over soldiers who'd remained neutral = late afternoon Central Committee of Bolshevik party called off demonstrations
6 of 8
What happened on Saturday 6th July 1917?
Large force of loyal troops + 8 armoured cars and heavy artillery surround the Bolshevik headquarters= 500 Bolsheviks inside surrenderd + arrested. Lenin already fled in disguise
7 of 8
What affect did the 'July Days' have on the Bolsheviks?
Major setback. Ended up uniting the Provisional government and Soviet against them. Lenin accused of committing treason, being a German spy and a traitor. Leaders all in prison or fleeing Russia
8 of 8

Petrograd- concert for soldiers leaving for the front turned into an anti- government rally. Demans for all political power to the Soviet. Troops returned to barracks formed a Provisional Revolutionary Committee to campaign against the government 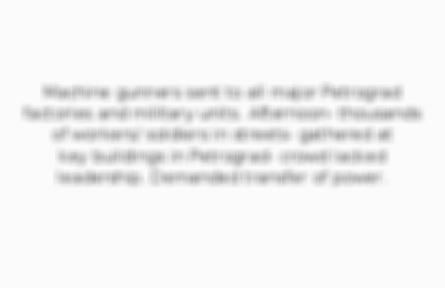 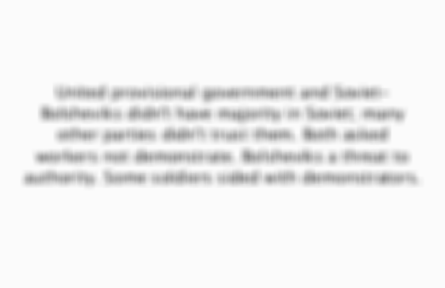 What happened on Wednesday 4th July 1917? 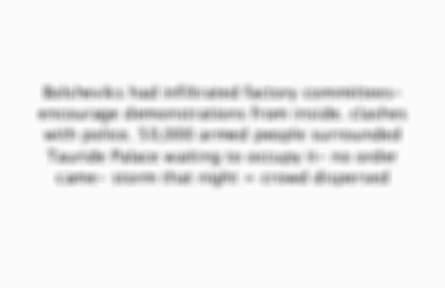