Home > A Level and IB > History > Henry VII: 2 - Government
What were the main functions of the Council under Henry VII?
1) To advise the king 2) To administer the realm on the king's behalf 3) To make legal judgements
1 of 22
What was the main offshoot of the council and what was its purpose?
The Council Learned - developed under the second half of the reign (under Bray's leadership at first), main function was to exploit the kings prerogative rights and maintain the king's revenue.
2 of 22
What was one of the main things the Council Learned had made effectively? Why was the Council Learned seen as 'shady'?
Bonds and recognizances - entrapping many of the king's subjects. It was not recognised as a court of law and therefore no one could appeal.
3 of 22
Who were the key councillors of the Council Learned?
Sir Reginald Bray (original leader) - joined by Richard Empson (fiercely ambitious and ruthless). Following Bray's death in 1503, Empson was joined by Edmund Dudley.
4 of 22
How did some view the Council Learned? Who in particular?
The Council Learned created enemies amongst some of the king's key advisers such as Bishop Fox and Sir Thomas Lovell.
5 of 22
After the King died what did Fox and Lovell do?
Removed Empson and Dudley from the Council Learned. This bought rejoicing in the street showing just how unpopular and feared they were.
6 of 22
What were the two levels to the court?
The Household proper and the Chamber
7 of 22
Function of the Household proper?
Responsible for looking after the king, courtiers, guests and others who were being entertained.
8 of 22
Function of the Chamber?
Presided over by the Lord Chamberlain - powerful position and one of trust too therefore it was a considerable blow to Henry to learn his Lord Chamberlain, William Stanley, was involved with Warbeck.
9 of 22
What was Henry's response to Stanley being involved in the Perkin Warbeck imposture?
He created the Privy Chamber where he could retreat, protected by his most trusted servants.
10 of 22
What did the privy chamber do?
Made it difficult for those who were out of the king's favour to regain the king's support
11 of 22
Main functions of Parliament under Henry VII?
Pass laws + grant taxation to the Crown (and a secondary function as a means by which local grievances could be passed on to the king's officials by MPs)
12 of 22
What were Henry's early parliaments concerned with?
Issues of national security and the raising of revenue - his first two parliaments passed Acts of Attainder.
13 of 22
What were Acts of Attainder?
Declared individuals guilty without a trial and if they were dead their property was forfeited to the Crown.
14 of 22
What did Henry's first parliament pass?
Tonnage and poundage for life (customs revenue)
15 of 22
What did other parliaments grant Henry?
Extraordinary revenue, usually via fifteenths and tenths in 1487, 1489-90, 1491-92 and 1497, raising £200,000 - allowing Henry to wage war.
16 of 22
What did Henry's final parliament do?
in 1504: limited the demand for extraordinary revenue, and received an undertaking that the king would not seek more revenue by this means.
17 of 22
Henry + nobles?
Many nobles died during the wars of the roses leaving their lands to the Crown. Noble power was largely confined to the north. The Earl of Northumberland was murdered in 1489 leaving Henry to reinstate the Earl of Surrey (supporter of Richard III).
18 of 22
Did Henry trust his nobles?
Reinstating the Earl of Surrey was high risk but he proved loyal - the lack of trust was showed by Henry employing a network of spies to report on noble performance and impose bonds and recognizances.
19 of 22
Who were JPs?
Justices of the Peace - maintain law and order in the countryside. Various acts were passed to increase their power: tax assessment, alehouse regulation etc.
20 of 22
What were the 6 sources of royal income?
Crown lands, feudal dues + royal prerogative, customs revenue, pensions, profits of justice, extraordinary revenue.
21 of 22
Outcomes of Henry's financial reforms?
Left around £300,000 to Henry VIII but much of this was taken from landowners, the people Henry needed support from if his throne was ever threatened.
22 of 22

What was the main offshoot of the council and what was its purpose?

The Council Learned - developed under the second half of the reign (under Bray's leadership at first), main function was to exploit the kings prerogative rights and maintain the king's revenue. 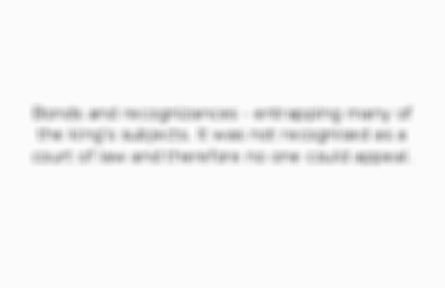 Who were the key councillors of the Council Learned? 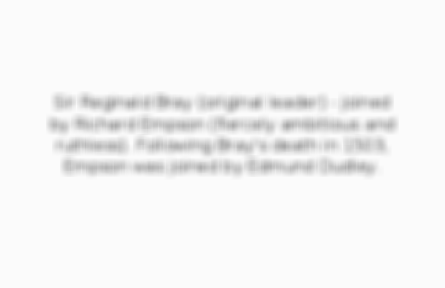 How did some view the Council Learned? Who in particular? 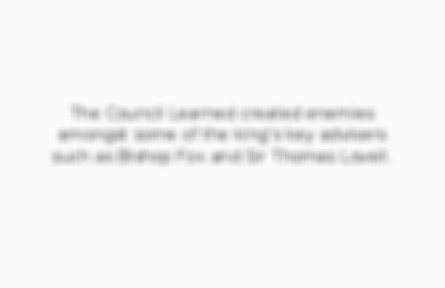