Home > A Level and IB > Sociology > Families and Households
What do Liberal Feminists say about family roles?
Womens oppression is gradually changing and being overcome and believers we are moving towards greater equality however full equality will depend on further reforms, changing in attitudes and socialisation of both sexes
1 of 11
What do Marxists Feminists say about family roles?
Women are being exploited to meet the needs of capitalism and they reproduce the labour force through unpaid domestic work Fran Ansely (1972) describes women as 'takers of ****' as they soak up husbands fustration resulting from exploitation at work
2 of 11
What do Radical Feminists say about family roles?
Men are the source of womens oppession Believes the patriarchal system needs to be overturned and the nuclear family must be abolished. Germaine Greer argues that households should become matrifiocal- Alternative to hetrosexual family
3 of 11
What do Difference Feminists say about family roles?
We cannot generalise womens experiences in family roles as they may view it in different ways. For example Black Feminists view the black family positively as a source of support and income.
4 of 11
Whats the Four Basic Functions George Peter Murdock presents?
1. Stabilisation of sex drive 2.Reproduction of next generation 3.Socialisation of the young 4.Meeting it's members economc needs
5 of 11
What did Talcott Parsons say about the family?
Nuclear family became bettee fitting for industrialisation. Through loss of functions the family now perform two 'irreducible' functions: Primary Socialisation of Children & Stablisation of Aldult personalities
6 of 11
What three things do marxists mention in their view on the family ?
1.Inhertitance of Propety- Classless sociey- 'Primitive communism' Friedrich Engles 'Promiscous horde' 2. Ideological Functions-Inequality/Hierachy 2.A Unit Of Consumption- Selling products for more than the wage of the workers/Media/Consumer Goods
7 of 11
Name the effects of how changes in fertility affect society?
The Family-Smaller families, more likely to go to work. The Dependency Ratio-Children make up large % of dependent population. Public Services and policies-Example, maybe fewer schhols, maternity and health care services may be needed/Costs of M&P
8 of 11
What is life expectancy?
Life Expectancy refers to how long on average a person born in a given year can expect to live.
9 of 11
What are the effects of the ageing population?
Public services-Health and social care services .One person pensioner households .The Dependency Ratio - Pay for pensions and health care
10 of 11
Why has divorce increased?
Changes in the law. Declining Stigma and Changing Attitudes.Secularisation. Rising expectations of marriage. Changes in the position of women
11 of 11

What do Marxists Feminists say about family roles?

What do Radical Feminists say about family roles? 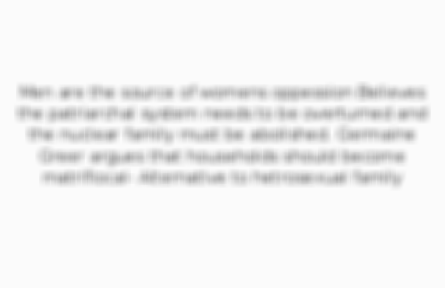 What do Difference Feminists say about family roles? 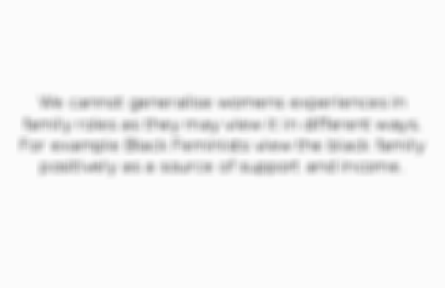 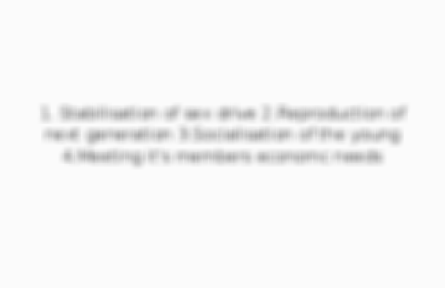