Home > GCSE > History > Cold War-Unit 2 part b
What were the long term consequences of the Cuban Missile Crisis?
Long term effects: The USSR wanted to catch up with the USA in the arms race, by 1965 they were on equal footing in terms of nuclear capability, also France chose to leave NATO in 1966 as they did not want to fight in a nuclear war.
1 of 17
What were the results of the USSR catching up in the arms race?
When the USSR were on an equal footing with America regarding nuclear capability there was greater stability in their relationship as they were both more likely to avoid war (their success would be limited) and both sides noted the MAD theory
2 of 17
What was the MAD theory?
MAD stands for Mutually Assured Destruction. This meant if one side launched their weapons the other would as well meaning there would probably not be a winner of a nuclear war.
3 of 17
Why was Novotny an unpopular leader of Czechoslovakia?
Novotny was the leader of Czechoslovakia. He was unpopular as people in Czechoslovakia had a low standard of living due to political repression and economic problems.
4 of 17
Who became the new leader of Czechoslovakia? When did he become the leader?
On 5th January 1968 Alexander Dubcek became the new leader of Czechoslovakia.
5 of 17
What was Dubcek's aim?
Dubcek aimed to create a popular form of communism, he described it as 'socialism with a human face'. He wanted to remove the most repressive aspects of communist rule and reform the economy and allow more cultural freedom.
6 of 17
Who was the leader of the Soviet Union when issues in Czechoslovakia arose?
Leonid Brezhnev
7 of 17
What was the 'Prague Spring'
Prague Spring is a phrase used to describe the liberal changes bought about by Dubcek.
8 of 17
When did Dubcek announce the reforms of the 'Prague Spring'? What were they?
In April 1968 Dubcek announced his reforms: the relaxation of press censorship, legalisation of political opposition groups, official gov. tolerations of political criticism & 'market socialism' : the reintroduction of capitalist elements in the Czech eco
9 of 17
How did Czechoslovakian people react to Dubcek's reforms?
Students, intellectuals, workers and young members of the Czech communist part welcomed the reforms. However older communists were shocked by the 'Prague Spring' this negativity was also felt by Brezhnev and his Eastern European allies.
10 of 17
What was Brezhnev's dilemma regarding Czechoslovakia?
Brezhnev regarded Dubcek as a friend and he had made no attempt to leave the Warsaw pact or damage the USSR. However, Soviet intelligence reports suggested that Dubcek's reforms would weaken Soviet control in Czechoslovakia.
11 of 17
What did the Brezhnev Doctrine state?
The Brezhnev Doctrine was used to justify the Soviet invasion of Czechoslocakia. It stated that the USSR had the right to invade any country in Eastern Europe whose actions appeared to threaten the security of the whole eastern bloc.
12 of 17
When did the USSR invade Czechoslovakia? What happened?
On the 20th August 1968 Soviet tanks invaded Czechoslovakia. Dubcek ordered Czechoslovakian's not to respond with violence, but there was still a lot of non violent disobedience (students stood in front of tanks with banners against the invasion).
13 of 17
What happened to Dubcek when the USSR invaded Czechoslovakia?
Dubcek= arrested & taken to Moscow where Brezhnev 'tearfully' told him he'd betrayed socialism. Dubcek= forced to sign the Moscow protocol which committed the Czech gov. to protect socialism (reintroduced censorship and removing political opposition)
14 of 17
What was America's response to the invasion of Czechoslovakia?
America publicly condemned the invasion but offered no military support as they wanted to avoid war and avoid further military entanglement (they were already fighting a war in Vietnam). So it slightly worsened relations but not much.
15 of 17
What was the Western European response to the invasion of Czechoslovakia?
Western European governments followed America's lead they condemned the invasion but offered no help.But, the reaction of communist parties in Italy and France were outraged and formally declared themselves independent from the Soviet communism in
16 of 17
What was the Eastern European response to the Czechoslovakian invasion?
Lead to discontent in the East. Yugoslavian&Romanian governments condemned it & distanced themselves from USSR & following 1968 they formed alliances with China dividing the communist world. But East Ger and Polish government welcomed the invasion.
17 of 17

What were the results of the USSR catching up in the arms race?

What was the MAD theory? 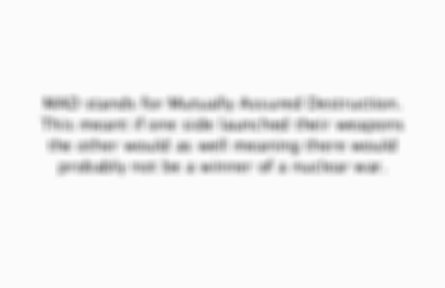 Why was Novotny an unpopular leader of Czechoslovakia? 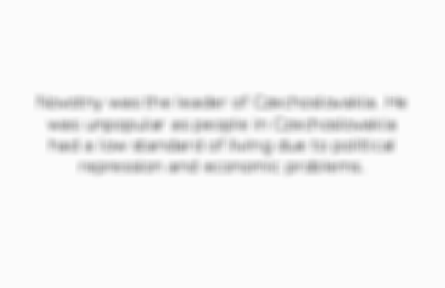 Who became the new leader of Czechoslovakia? When did he become the leader? 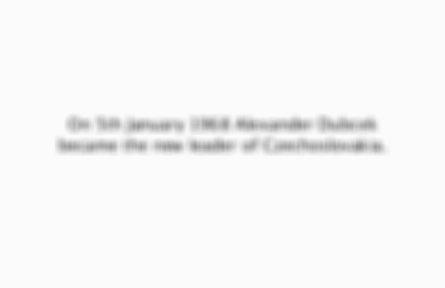