Home > Fun > Fun > Anti-Semitism in Germany 1933-1939
Why? (Reasons for targeting the Jews)
1. Scapegoats(blamed for issues)for Germany's problems;(Armistice, 1918/Treaty of Versailles, 1919/ Hyperinflation, 1923) 2. Blamed for death of Christ 3. Jealousy of their wealth and success 4. Seen as racially inferior to Ayrans(Meaning of Ayrans)
1 of 17
Why did most Germans not object?(Bystanders:turned a blind eye. Did nothing to intervene.)
1. Fear;(**/Gestapo used violence/Concentration camps) 2. Believed propaganda;(E.g. The Eternal Jew) 3. Benefitted;(Business e.g. Germans took over the jobs which Jews lost.)
2 of 17
How? (Actions used against Jews) Name two things that happened in 1933
1. Boycott of Jewish shops, 1933(No Germans used their shops) 2. Sacked from civil service and government jobs, 1933(Replaced with Germans)
3 of 17
What were the Nuremberg Laws, 1935(Legal attack on Jews)
1. Took away citizenship(couldn't be called German citizens, couldn't vote.) 2. No sexual relationship with Germans(loss of human rights & freedom. No mixed race children. Hitler believed Jewish blood would destroy Ayran blood. - control birth.
4 of 17
What 3 things happened in 1938?
1. Identity cards stamped J(Label them) 2. Israel/Sara added to name( Old Testament-to mock/ Jews were not given individuality) 3. Children humiliated in school & not allowed to attend German schools from November(Mocking appearance e.g. nose)
5 of 17
What happened at the Kristallnacht, November 1938?
1. In response to murder of a Nazi by a Jew in Paris(An excuse for the rest after this) 2. Destruction of synagogues, homes and businesses 3. 91 Jews killed and 20,000 arrested & sent to concentration camps 4. Jews had to pay 1 billion marks.
6 of 17
What happened in 1939?
1. Jews encouraged to emigrate & Hitler spoke of future destruction of Jews
7 of 17
What happened in 1942?
The Final Solution/Holocaust
8 of 17
What does Anti-Semitism mean?
Hatred of Jews
9 of 17
What is a Scapegoat?
A person who is blamed for the wrong doings, mistakes or faults of others.
10 of 17
What does the term Resentful mean?
Feeling or expressing bitterness
11 of 17
What was a Bystander?
A person who did nothing to stop the Holocaust. They could have been frightened of punishment. Martin Niemoller's poem was about the dangers of being a bystander.
12 of 17
What was Nazi Germany?
1933-1945 when Hitler was in power.
13 of 17
What is Liberation?
To be rescued / released/ freed. Prisoners were first liberated by soviet troops in January 1945.
14 of 17
What was a Rescuer?
People who helped the Jews. For example, the Soviet troops who liberated prisoners from the camps.
15 of 17
What was a Victim?
People who suffered and had no choice. For example, Jews, Jehovah's Witnesses, Gypsies, people with disabilities and homosexuals were all victims in Nazi Germany.
16 of 17
What was a Perpetrator?
People who chose to participate in the Holocaust. For example, the Nazis and the **.
17 of 17

Why did most Germans not object?(Bystanders:turned a blind eye. Did nothing to intervene.)

How? (Actions used against Jews) Name two things that happened in 1933 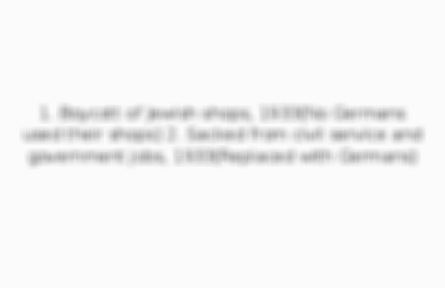 What were the Nuremberg Laws, 1935(Legal attack on Jews) 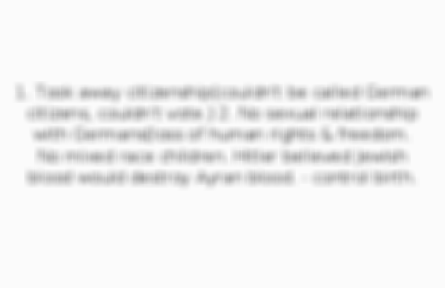 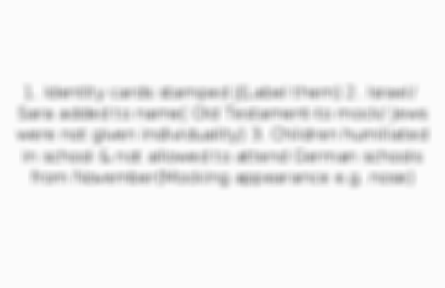