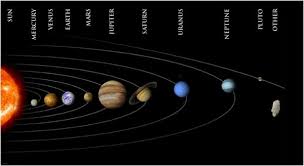 There are eight planets altogether. These are :

Fact: There's a hole in uranus!! Sounds a bit cheesy, but when you look at the planet scientifically, it's true!!

The four inner planets are the closest planets to the Sun. These planets are known as the 'Terrestrial planets' after the…