Home > GCSE > History > The end of the USSR
Fullscreen

In 1979, the Soviet Union invaded Afghanistan to try to prop up the communist government there, which was being attacked by Muslim Mujaheddin fighters. This immediately caused a rift with America, which boycotted the 1980 Olympics. 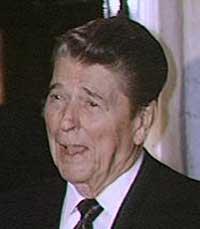 President Reagan referred to the Soviet Union as the 'evil empire'

In 1980, Ronald Reagan became president of the USA. As a strong anti-communist, he called the Soviet Union the "evil empire" and increased spending on arms. The US military developed the neutron bomb, cruise missiles and a Star Wars defence system using space satellites.