William Shakespeare was born in Stratford-upon-Avon in 1564. His father sold gloves and became an important person in the town. William, one of eight children, was the eldest son, and probably educated at the local grammar school. He married when he was only 18 and his wife, Anne Hathaway, was eight years older than him. They had two girls and a boy (who died aged 11).

Nobody knows how Shakespeare began to write, or when he entered the theatre. But we know he became a leading member of the theatre troupe known as 'The Lord Chamberlain's Men'. The company proved very popular, and later, when King James I granted it the right to perform at his court, became known as 'The King's Men'.

Shakespeare wrote more than 30 plays for 'The King's Men', making it the most important theatre company in the country. He often wrote parts for particular actors, too.

He was very successful and wealthy in his time, and his work has remained very popular ever since.

Romeo and Juliet in Popular Culture

The basic story, of two young lovers from opposing families in Italy, had been popular for hundreds of years before Shakespeare wrote the play. However, there is no evidence Romeo or Juliet ever actually existed. We think Shakespeare based the play on a poem he had read.

What makes Romeo and Juliet special is how Shakespeare tells the story. It has become perhaps his best-known play. Romeo and Juliet has been filmed many times and adapted in all sorts of ways. For instance, there are cartoon versions for children, older versions with the rude jokes taken out, and others set with gang fights in the US.

There are also countless references to Romeo and Juliet in songs, books, even in ordinary conversation. For instance, a young lad who goes out with lots of girls is often referred to as a real 'Romeo', even if he is actually called Wayne and lives in Nottingham with his mum.

The play also contains a lot of expressions that Shakespeare invented and are still in use today, such as 'on a wild goose chase' or 'fool's paradise'. More recently, builders have started to use the term 'Juliet balcony' (although many of them now spell it 'Juliette balcony'). This is very shallow balcony with a rail in front of a patio door. Oddly enough, there's no mention of a balcony in the play itself. But it has become traditional to have Juliet talking to Romeo from one. 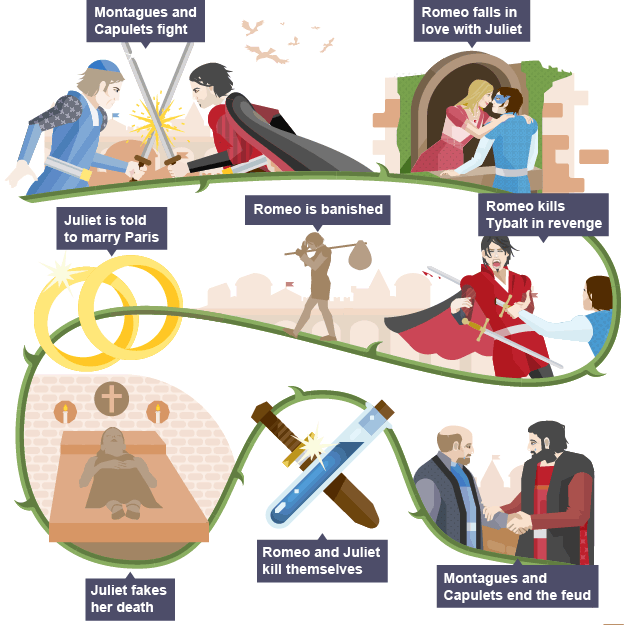 I recommend this to everyone as this is helpful.

this is actually really helpful so thanks

is this from bcc bitesize?

its basically the same thing I just read