A brief history of the English history

The Political Climate of Milton's Day 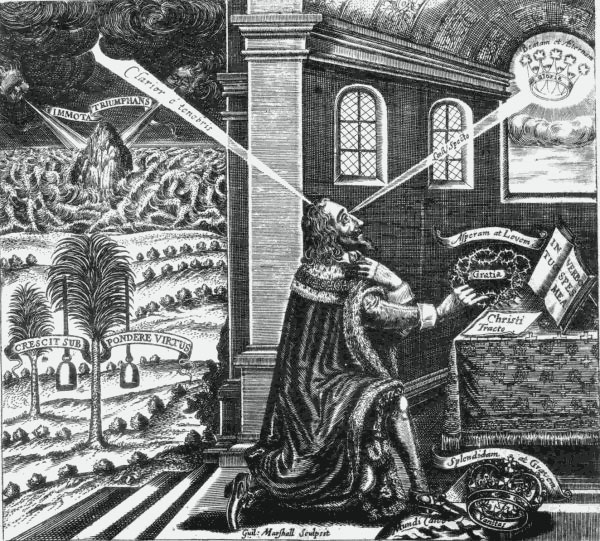 Frontispiece portrait of Charles I, from Eikon Basilike (1649).

The mid seventeenth-century was a time of great social and cultural turmoil. A series of political and military conflicts, now known as the English Civil War or the English Revolution, was waged intermittently between Parliamentarians and Royalists from 1642 to 1651.

There were many factors contributing to the tensions between the Crown and Parliament, including Charles' marriage to the Catholic princess, Henrietta-Maria of France, and his desire to be involved in European wars. But the most interesting were the ideological questions being raised about the nature of government and authority. In the seventeenth century, the Crown played a much greater role in the running of the country than it does today. Parliament's power was growing, but before the Civil War, it was called and dissolved at the will of the monarch, and used mostly to issue taxes when the king needed money. Charles I believed in the 'divine right of kings' and ruled fairly autonomously, but much of Parliament believed that the king had a contractual obligation to the people to rule without tyranny. Parliamentarians were angry that Charles refused to call a Parliament for most of the 1630s, during which time he tried to levy what were considered to be illegal taxes. With Archbishop Laud, he tried to take the Church in the direction of High Anglicanism, which aroused suspicion that he was trying to revert the country to Catholicism.

In 1649, after years of various political manoeuvres and bouts of fighting, King Charles I was executed for treason. For the next decade England had no monarch. Initially, a Commonwealth was formed and England was ruled by a republican government, but in 1653 Oliver Cromwell became Lord Protector, essentially a military dictator. He was succeeded by his son Richard in 1658, but because of faction fighting and Richard's lack of popularity as a leader, the republic failed. Charles II, the executed monarch's son, was declared King in the Restoration of 1660.

In 1641 Milton published Of Reformation Touching Church-Discipline in England, marking the beginning of a career of political prose writing which would last almost until his death in 1674. Close analysis reveals a subtle change in his thought away from the youthful orthodoxy which had led him to consider ordination as a priest, and towards the increasingly heretical and subversive theology which typifies his later writings. However, the general thrust of his political writings is towards Puritan reformation in the church, and the replacement of the monarchy with a free commonwealth. His enduring support for Cromwell resulted in his appointment in 1649 as Secretary for Foreign Languages, a position which involved acting as the voice of the English revolution to the world at large. He remained stalwart…