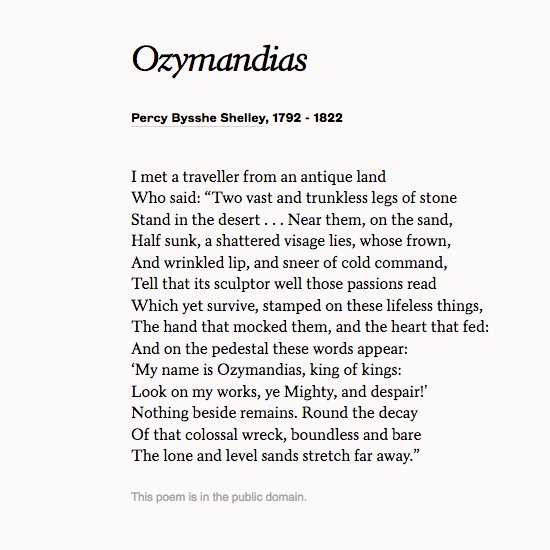 Shelley was a 'romantic' poet - 'Romanticism' was a movement that had hugely influenced art and literature in the late 1700s and early 1800s. Romantic poets believed in emotion rather than reason, they tried to capture intense experiences in their work and particularly focused on the power of nature. Shelley also disliked monarchies, absolute power and the oppression of ordinary people. His racial political views were inspired by the events of the French revolution, where the monarchy was overthrown.

What is the poem about?

The narrator meets a traveller who tells him about a statue standing the middle of a desert. It is a statue of a king who ruled over a past civilisation. His face is proud and he arrogantly boasts about how powerful he is in an inscription on the statue's base. However, the statue has fallen down and crumbled away so that only the ruins remain.

Form - The poem is a sonnet, with a turning point at line 9. Although it does not follow a regular sonnet rhyme scheme, perhaps reflecting the way that human power and structures…