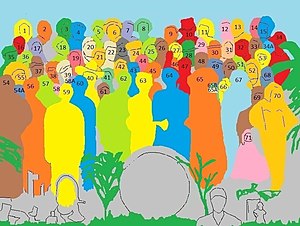 The Beatles in the flesh and most of the wax statues, have been removed to uncover some hidden figures

The Beatles' 1967 album Sgt. Pepper's Lonely Hearts Club Band has a widely recognized album cover that depicts several dozen celebrities and other images. The image was made by posing The Beatles in front of life-sized, black-and-white photographs pasted onto hardboard and hand tinted.[1]

It was created by Jann Haworth and Peter Blake, who in 1967 won the Grammy Award for Best Album Cover, Graphic Arts for their work on it.[2] Many people have speculated about the cover's intended meaning.[3][not in citation given]

Peter Blake has said that the intention was to show a new band, Sgt. Peppers, surrounded by fans after a performance.[1][4]

“I suggested that they had just played a concert in the park. They were posing for a photograph and the crowd behind them was a crowd of fans who had been at the concert. Having decided on this, then, by making cut-outs, the fans could be anybody, dead or alive, real or fictitious. If we wanted Hansel and Gretel, I could paint them and they could be photographed and blown up. I asked the four Beatles for a list and I did one myself. Robert Fraser did a list and I can’t remember whether Brian Epstein did one or not. The way that worked out was fascinating. John gave me a list and so did Paul. George suggested only Indian gurus, about six of them, and Ringo said, ‘Whatever the others say is fine by me’ and didn’t suggest anyone. It’s an insight into their characters. All kinds of people were suggested. Hitler was there; he is actually in the set-up, but he is covered by the Beatles themselves as we felt he was too controversial. The same applied to Jesus. There were only two of their contemporaries on the cover. Bob Dylan was suggested by John and I put on Dion because he is a great favourite of mine.”