Fractional distillation separates a mixture into a number of different parts, called fractions.

Crude oil is a mixture of hydrocarbons. The crude oil is evaporated and its vapours condense at different temperatures in the fractionating column. Each fraction contains hydrocarbon molecules with a similar number of carbon atoms and a similar range of boiling points.

The diagram below summarises the main fractions from crude oil and their uses, and the trends in properties. Note that the gases leave at the top of the column, the liquids condense in the middle and the solids stay at the bottom.

As you go up the fractionating column, the hydrocarbons have:

Crude oil is not the only fossil fuel.

Natural gas mainly consists of methane. It is used in domestic boilers, cookers and Bunsen burners, as well as in some power stations.

Coal was formed from the remains of ancient forests. It can be burned in power stations. Coal is mainly carbon but it may also contain sulfur compounds, which produce sulfur dioxide when the coal is burned. This gas is a cause of acid rain. Also, as all fossil fuels contain carbon, the burning of any fossil fuel will contribute to global warming due to the production of carbon dioxide.

The slideshow shows this process: 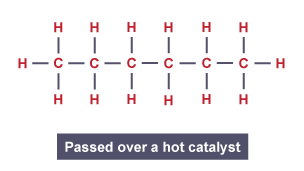 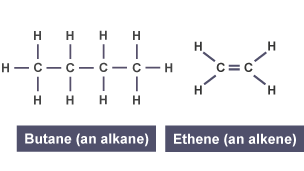 Some of the smaller hydrocarbons formed by cracking are used as fuels, and the alkenes are used to make polymers in plastics manufacture. Sometimes, hydrogen is also produced during cracking.

Fuels are substances that react with oxygen to release useful energy. Most of the energy is released as heat, but light energy is also released.

About 21 per cent of air is oxygen…