Aromatic compounds and reactions of Benzene

Benzene is a hydrocarbon compound with a molecular formula of C6H6.

The original model for the structure of benzene - Kekules' model stated that benzene was formed of 3 alternating double bonds in a ring of the six carbon atoms. The model was proven wrong due to the following evidence:

The new delocalised model proposes that benzene is formed of six carbon atoms joined with single sigma bonds and the p orbital electrons are spread above and below the plain in a delocalised pi system. 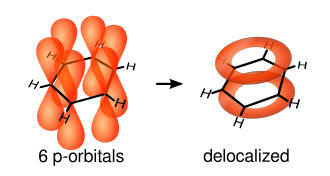