Home > A Level and IB > Biology > Stages of Mitosis

1. Chromatin threads are located in the nucleus.

2. No chromosomes are yet visible.

3. Towards the end of this stage the nucleus begins to become a circular shape.

You can identify interphase from a photo because you will not see any chromosomes and the nucleus should be circular in shape.

Diagram of Interphase to help with exam questions: 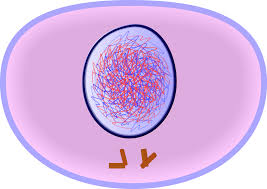 As you can see there are no chromosomes present and the nucleus is a circular shape.

2. Replication centrioles move to opposite poles of the nucleus.

3. A spindle made of microtubules forms across the nucleus.

4. The nucleolus and nuclear membrane disappear.

If you are given an image in the exam and are asked to detect what stage the cell is at, you can tell it is at prophase because the chromosomes will be visible.

Diagram of Prophase to help with exam questions:

The chromosomes are now clearly visible

1. The chromosomes migrate due to spindle activity to the equator of the spindle where each separate chromosome is attached by means of its centromere to a separate spindle fibre.

2. The sister chromatids within each chromosome are orientated towards opposite poles of the spindle.

3. The centromeres replicate to allow the sister chromatids to be pulled apart.

In an exam question, you can identify metaphase from an electron micrograph photo because the chromosomes will be lined along the equator.

Diagram of Metaphase to help with exam questions:

You can tell this is metaphase because the chromosomes are lined up on the equator.

1. Spindle activity pulls the sister chromatids apart. They become individual chromosomes and are pulled to opposite poles of the spindle.

2. As they are pulled apart, their centromeres lead and their arms are dragged behind.

You can easily identify anaphase from a photo because you will be able to see the chromosomes which are now 'V' shaped (from being pulled apart) along the top and bottom (north and south for example) edge of the cell.

Diagram of Anaphase to help with exam questions: 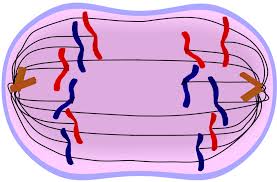 The chromosomes are now being pulled to the poles of the cell, this is how we identify that the cell is going through anaphase.

1. Spindle fibres disintegrate and chromosomes congregate together at the two poles.

2. The chromosomes disappear as the DNA de-condenses.

3. The nuclear membrane and nucleolus reform.

This is probable the easiest stage to have to identify in an exam, it can be easily done because you will spot the cytoplasm splitting in two. (It should look like two eggs cracked in one pan, the yolks are still separate but the whites have joined slightly in the middle:P)

Diagram of Telophase and Cytokynesis to help with 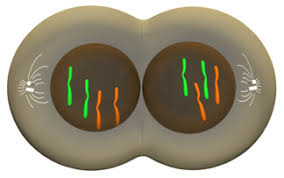 We can now see two nucleus'
...sorry about the random change in image, from the previous purple images, it's because when I inserted the picture it became massive so half of it got cut off.

this is good! especially the bits on how you would identify the stages in an exam !

I have added some images now so that each stage is easier to visualise and you can see where I am coming from when I described how to identify each stage in an exam.