The poulation of the world is increasing at an exponential rate - It's growing faster and faster.

- Birth Rate - the number of live babies born per thousand of the population per year.

- Death Rate - the number of deaths per thousand of the population per year.

*The population size of a country is also affected by migration- the movement of people from one area to another. 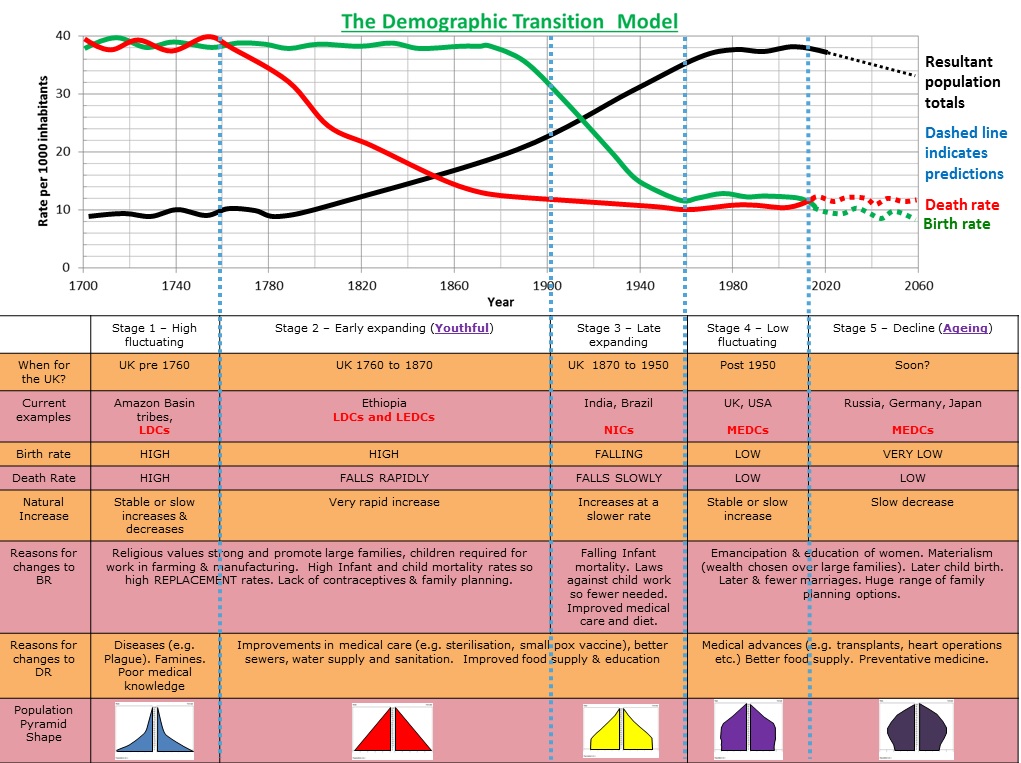 1)  Services such as healthcare and education can't cope with the rapid increases in population, so not everybody has access to them.

2) Children have to work to help support their large families so they miss out on their education.

3) There aren't enough houses for everyone, so people are forced to live in makeshift houses in overcrowded settlements, leading to health problems because the houses aren't always connected to sewers or they don't have access to clean water.

4) There are food shortages if the country can't grow or import enough food for the population.

1) Most of the population is made up of young people so the government focuses on policies that are important to young people e.g education and provision of things like childcare.

2) There are fewer older people so the government doesn't have to focus on policies that are important to older people e.g pensions.

1) There aren't enough jobs for the number of people in the country, so unemployment increases.

2) There's increased poverty because more people are born into families that are already poor.

Some governments do this by having laws about how many children couples are allowed to have.

Governments also help couples to plan (and limit) how many children they have by offering free contraception and sex education.

This helps towards sustainable development because it means the population wont get much bigger. - There won't be many more people using up resources today, so there will be some left for future generations.

Immigration laws aim to control immigration (people moving into a country to live there permenantly).

Governments can limit the number of people that are allowed to immigrate.

They can also be selective about who they let in e.g. letting in fewer people of child-bearing age means there will be fewer immigrants having children.

This helps towards sustainable development because it slows down population growth rate.

1 )China has the largest population of any country in the world- over 1.3 billion.

2) Different policies have been used to control rapid population growth- the most important being the 'one-child policy' introduce in 1979. This means that all couples are very strongly encouraged to have only one child.

4) Over the years, the policy has changed so there are some exceptions:

1) The policy has prevented up to 400 million births. The fertility rate (the average number of children a woman will have in her life) has dropped from 5.7 in 1970 to around 1.8 today.

2) some people think that it wasn't just the one-child policy that slowed population growth. They say older policies about leaving longer gaps between children were more effective, and that Chinese people want fewer children anyway as they've become more wealthy.

1) Indonesia is a country made up of thousands of islands. It has the 4th largest population of any country in the world- over 240 million.

2) The population isn't distributed evenly- most people (around 130 million) live on the island of Java.

3) This has lead to social and econmoic problems on the densely populated islands, e.g a lack of adequate services and housing as well as unemployment and povety.

4)The Indonesian government started a policy in the 1960's called the transmigration policy, which aims to reduce the impacts of population growth.

1) Millions of people have been moved, but the population still isn't much more evenly distributed.

2) Not all the people who were moved escaped poverty- either they didn't have the skills to farm the land, or the land was to poor to be farmed on their new island.

3) Lots of people were moved to land that was already occupied by native people. This created a new problem- conflict between the natives and the migrants.

The population structure of an ageing population has more older people than younger people because few people are being born, and more people are surviving to an old age.

Countires with an ageing population are usually the richer countries in stage 5 of the demographic transition model.

This has econmic and social impacts, whcih can affect a country's future development.

Economic Impacts Of An Ageing Population

1) The working population pays taxes, some of which the governent use to pay the state pensions of older people, and to pay for services like retirement homes and healthcare.

2) Taxes would need to rise because there are more pensions to pay for, and older people need more healthcare

Social Impacts Of An Ageing Population

2) People will need to spend more time working as unpaid carers for older family members. This means that the working population have less leisure time are more stressed and worried.

3) People may have fewer children because they can't afford lots of children when tey have dependant older relatives. This leads to a drop in birth rate.

4) The more old people there are, the lower the pension provided by the government will be.

5) People will have to retire later because they can't afford to get by on a state pension.

Coping With An Ageing Population

1) Encouraging larger families e.g. in Italy, women are offered cash rewards to have more children. This increases the number of young people - When they start work there will be a larger working population to pay taxes and support the againg population.

2) Encouraging the immigration of young people from other countries. This increases the working population so there are more people paying taxes to support the ageing population.

These stratagies don't help towards sustainable development becuase the increase the population size.

3) Raising the retirement age - People stay in work longer and contribute to state pensions and personal pensions for longer. They will also claim the state pension for less time.

4) Raising taxes for the working population - This would increase the amount of money available to support the ageing population.

These strategies help towards sustainable development because they help to reduce the impacts of an ageing population, without incresing the population size.

The ageing population is caused by increasing life expectancy and dropping birth rate.

1) People are living longer because of advances in medicine and improved living standards. Between 1980 and 2006 life expectancy rose 2.6 years for women and 6.4 years for men- it's currently 81.5 for  women and 77.2 for men. This means it's proportion of older people in the population is going up.

3) since the 1970's the number of babies born has fallen. With fewer young people in the population the proportion of older people goes up.

1) More elderly people are living in poverty- the working population isn't large enough to pay for a decent pension, and many people dn't have other savings.

2) Even though the state pension is low the government is sruggling to pay it. The taxes paid by people in work aren't enough to cover the cost of pensions and as the population ages the situation is getting worse.

3) The health care service is under pressure because older people need more care than younger people. For exaple, in 2005 the average stay in hospital for people over 75 was 13 nights, but for the whole of the UK the average stay was only 8 nights.

1)Raise the retirement age- the retirement age in the UK is currently 65 for men and 60 for women. This is going to change in stages, so that by 2046 it will be 68 for everyone. People will have to work for longer, so there will be  ore people paying tax and fewer people claiming pensions.

2) Encourage immigration of young people to the UK- the UK has allowed immigration of people from other countries that joined the EU in 2004. Around 80% of immigrants from new EU countries in 2004 were 34 or under. This increases the number of people paying taxes, which helps to pay for state pensions and services.

3) Encourage women to have children- working family tax credits support women (and men) who go back to work after their children are born. This makes it more affordable for couples to have children.

-People can move to different countries. This can be across the world or just a few miles across the border.

-People can move between different regions within countries, e.g. from the countryside to a city(called rural-urban migration).

Push factors are the things about a person's place of origin (where they originally lived) that make them decide to move. E.g.

Pull factors are things about a person's destination that attracts them. E.g.

- Money is sent back to the source country by emigrants

- Labour shortage - it's mostly people of working age that emigrate.

- Locals and immigrants compete for jobs - this can lead to tension and even conflict.

- Increased demand for services, e.g overcrowding in schools and hospitals.

- Not all the money earnt by immigrants is spent in the destination country - some is sent back to their country of origin.

Migration Within And To The Eu- Poland To UK

Half a million people from Poland came to the Uk between 2004 and 2007. There were push and pull factorsfor why people left Poland for the UK;

Impacts In Poland And The UK

Impacts in the UK:

Refugees Migrate To The EU

Huge numbers of people migrate from Africa to the EU. For example, by crossing the Mediterranean sea to Spain - in 2001, 41 500 emigrants from Africa were caught and refused entry to Spain.

Many of these migrants are refugees from wars in central and western African countries. For example more than 2 million people were forced from their homes because of the civil war in Sierra Leone ( in West Africa ) between 1991 and 2002.

There are only push factors for African refugees of war - people flee the countrie because of threat of violence or death during the wars. Here are some of the impacts:

Social tension between immigrants and Spaniards,, more unskilled workers in Spain, which has filled gaps in the labour market, average wage for unskilled workers has gone down because there are so many, birth rate has increased.