Home > A Level and IB > Chemistry > Polarisation and Intermolecular Forces

The ability to attract the bonding electrons in a covalent bond is called electronegativity.

In a covalent bond between two atoms of different electronegativities, the bonding electrons are pulled towards the more electronegative atom. This makes the bond polar.

1. The covalent bonds in diatomic gases (e.g. H2, Cl2) are non-polar because the atoms have equal electronegativities and so the electrons are equally attracted to both nuclei.

2. Some elements, like carbon and hydrogen, have pretty similar electronegativities, so bonds between them are essentially non-polar.

4. So what you need to remember is that that the greater the difference in electronegativity, the more polar the bond.

The delta + and delta - charges on polar molecules cause weak electrostatic forces of attraction between molecules.

If you put and electrostatically charged rod next to a jet of a polar liquid, like water, the liquid will move towards the rod. I wouldn't believe it either, but it's true. It's because plar liquids contain molecules with permanent dipoles. Id doesn't matter if the rod is positively or negatively charged. The polar molecules in the liquid can turn around so the oppositely charged end is attracted towards the rod.

Intermolecular forces between molecules. They're much weaker than covalent ionic or metallic bonds. There are three types you need to know about:

1. Induced dipole-dipole or Van der Waals forces (this is the weakest type)

2. Permanent sipole-dipole (these are the ones that are caused by polar molecules)

3. Hydrogen bonding (this is the strongest type)

Van der Waals causes all atoms and molecules to be attracted to each other.

1. Electrons in charge clouds are always moving really quickly. At any particular moment, the electrons in an atom are likely to be more to one side than the other. At this moment, the atom would have a temporary dipole.

2. This dipole can cause another temporary dipole in the opposite direction on a neighbouring atom. The two dipoles are then attracted to each other.

3. The second dipole can cause yet another dipole in a thrid atom. It's kind of like a domino rally.

4. Because the electrons are constantly moving, the dipoles are being created and destroyed all the time. Even though the dipoles keep changing, the overall effect is for the atoms to be attracted to each other.

Van der Waals in a lattice

Van der Waals are responsible for holding iodine molecules together in a lattice.

1. Iodide atoms are held together in pairs by strong covalent to form molecules of I2.

2. But the molecules are then held together in a molecular lattice arrangement by weak Van der Waals attraction. 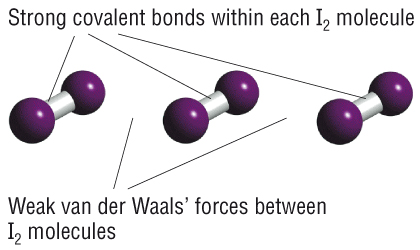 2. Molecules with greater surface areas also have stronger Van der Waals forces because they have a more exposed electron cloud.

1. Hydrogen bonding only happens when hydrogen is covalently bonded to fluorine, nitrogen or oxygen.

4. Hydrogen bonding has a huge effect on the properties of substances: 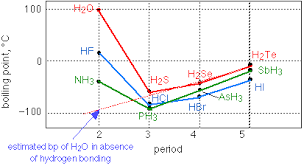