Specific latent heat of vaporisation=The amount of energy required to change the state of 1kg of the substance from liquid to vapour with no change in temperature.

Specific latent heat of fusion=The amount of energy needed to change 1kg of the substance from solid to liquid with no temperature change.

Energy can be transferred by conduction and convection

CONVECTION= WHEN PARTICLES MOVE FROM HOTTER REGIONS TO COLDER REGIONS, ALL DUE TO A CHANGE IN DENSITY

Energy can also be transferred through evaporation and condensation

The cooling effect from evaporation: The faster liquid particles which have more kinetic energy break away from the weak attraction between particles in the liquid, and so the liquid is cooler because the average kinetic energy is now decreased. Factors which affect evaporation include surface area, temperature, and a draught of air on the liquid.

The rate an object transfers energy depends on:

The bigger the temperature difference between an object and its surroundings, the faster the rate energy is transferred by heating

Most substances expand when heated, this can be useful or hazardous.

2.The hotter an object is the more infrared radiation it radiates (in a given time)

Wasted energy is transferred to the surroundings, and the further it spreads the less useful it becomes 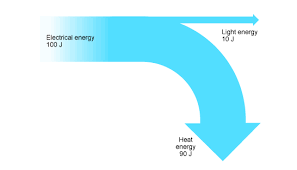 Solar panels can contain water heated by radiation from the Sun. The water can then be used to heat buildings or provide hot water.

There are a range of methods to reduce energy loss/consumption, these include:

U-values also help to measure the effectiveness of an insulator: The lower it is, the better the insulator