An atom has equal numbers of protons and electrons therefore it has zero charge/it is neutral.

An object which can be places in an electrical current is called a component. It is important to know the symbol and function/job of the following components.

Bulb Glows when the circuit is complete

Ammeter Measures the current, which is the flow off electrons through a component

Voltmeter Measures the voltage across a component

Closed Switch Current can flow around the circuit

Open Switch Circuit is broken - no current can flow

Variable Resistor A resistor where the resistance can be changed

Fuse Fuse wire melts if too much current passes through it

Diode Only let the current flow in one direction

Light Emitting Diode(LED) Only lets current flow in one direction. Doesn't light if connected the wrong way around

An electric current is the rate of flow of charge i.e. the amount of charge(electrons) which flows past a point each second.

Electric current is measured using an Ammeter. Ammeters are connected in the series so they measure the charge which passes through each second.

For electrons to flow there must be a source of p.d. in the circuit.

The p.d is a measure of the energy given to each unit of charge as it flows through the source of p.d.

Ohm’s Law states that the current through a conductor between two points in directly proportional to the potential difference across the two points.

The more the positive ions vibrate, the more resistance there is to electron flow (current).

If the temperature of the ions increased, the more the ions vibrate and the more resistance which means lower the current

For electrons to flow past a point each second (more current), there must be more energy for each electron (charge)(Potential difference)

If there is a directly proportional relationship between the current and the p.d there must always be the same resistance to the electron flow.

If we double the p.d, and this causes and increase in resistance, the current will increase but not by double.

If we double the current, but less than double the p.d, the resistance must be decreased.

If the resistance is extremely high, the current will be extremely low/zero.

A thermistor is a resistor where the resistance depends on the temperature of the thermistor.

When the temperature is increased, the resistance of the thermistor decreases.

Used in thermostats to regulate heating. Type of resistor so follows Ohm's Law.

An LDR is a resistor where the resistance depends on the light intensity of the LDR.

When the light intensity is increased, the resistance of the LDR decreases.

Used in appliances designed to only come on in the day or at night.

1. The current in a series circuit is the same at all points in the circuit.

2. The p.d (voltage) in a series circuit is shared between the components in the circuit.

The more resistance a component has, the more p.d. which is required for the electrons to pass through the components.

3. The total resistance is a series circuit is equal to the sum of the individual resistors.

4. The total p.d in a series circuit is equal to the sum of the p.d of each cell.

If the cell is facing the wrong way, minus the p.d

1. The current in a parallel circuit splits between the different branches 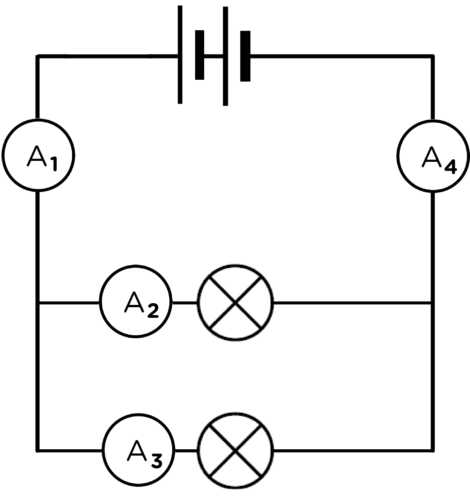 2. The p.d in a parallel circuit is the same across each branch, it is equal to the p.d of the supply.