What genes are and how they work

Genes carry the instructions that control how you develop and function. They do this by telling the cells to make the proteins needed for your body to work.

Each gene is a section of a very long molecule of DNA. Lengths of DNA are coiled and packed into structures called chromosomes. These are found in the nuclei of our cells. We have between 20 000 and 25 000 genes on our chromosomes.

Strands of DNA are made up of 4 chemicals called bases, as well as phosphate groups and sugar molecules. The order of the bases in a DNA strand determines the order of the amino acids in the protein.

Structural proteins give the body structure, rigidity and strength. eg. collagen in ligaments and keratin in skin

The Human Genome Project has identified the location of all the genes on human chromosomes. We call the complete gene set of an organism its genome.The project enables us to understand how genes work and how they control our characteristics and development. The project has ethical implications as some drug companies want to patent or 'own' genes. They could then charge other scientists money to investigate the genes, restricting scientific research.

How genes and chromosomes are organised

Pairs of chromosomes have genes for the same characteristic at identical positions on each chromosome of the pair.

Alleles are the different forms in which the genes controlling a characteristic can occur.

In most cases, alleles for a trait can be dominant (B) or recessive (b).

You can use a Punnett square to show genetic crosses and find the probability of two parents producing different types of offspring.

You can show the inheritance of a trait in a family over several generations using a family tree diagram. This is useful when tracing a genetic disorder, such as Huntington's disease, over generations.

Because of the shape of the sex chromosomes, there are parts of the X chromosome that can have no matching alleles on the Y chromosome. If a defective gene is found on this part of the X chromosome, this can result in a sex-linked disorder. Sex-linked diseases such as haemophilia (a blood clotting disorder) and red-green colour blindness, are far more likely to occur in males. 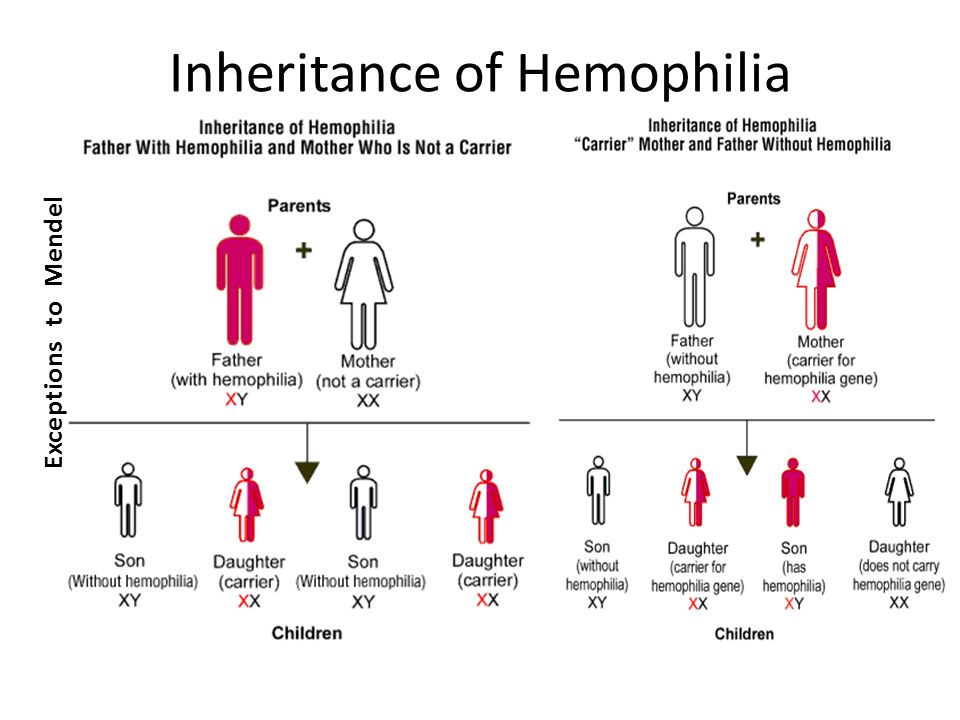 Some disorders are caused by faulty alleles:

Huntington's disease is a dominant disorder. It occurs in middle age and symptoms include tremors (uncontrollable shaking), memory loss, inability to concentrate and mood changes.

Cystic fibrosis is a recessive disorder. Symptoms include the production of thick, gluey mucus that affects the lungs and makes digesting food difficult, breathing problems and chest infections.

If both parents carry a disease, their child may or may not have the disease themselves.

Genetic screening=used to check for a particular disorder even when there is no history of it in the family. It is hoped that this will minimise the damage that such disorders cause.

Genetic testing=carried out when a genetic disease such as cystic fibrosis runs in the family. This may allow people to get treatment for the disease or plan for the future.

Genetic testing has ethical implications. For example, if a person has Huntington's disease, should they tell their employer, insurance company or family?

Genetic testing during pregnancy may involve cell sampling by:

-Testing a sample of cells taken from the placenta

Both tests carry a risk-around 1% of babies are miscarried as a result of genetic testing.

Production of embryos by IVF allows doctors to check the genetic make up of an embryo, prior to the implantation. This is known as 'embryo screening'. This is also used to investigate families with a known history of a disorder, such as cystic fibrosis. It allows doctors to remove any embryos suffering with the disorder and only implant those who don't have it.

Types of genetic tests are not always accurate and can give false-negative or false-positive results.

Clones are individuals with identical genes. In asexual reproduction, only one parent is involved so the offspring has identical DNA to the parent. Bacteria and some plants reproduce in this way.

Identical twins are human clones that are produced when a fertilised egg splits, resulting in 2 genetically identical individuals.

The advantages of producing clones/asexual reproduction are that:

-Successful characteristics are seen in offspring

-Asexual reproduction is useful when plants and animals live in isolation

-There is no genetic variation, this means that if conditions change or there is a disease, it will wipe out the entire population.

Clones have been produced by artificial animal cloning such as Dolly the sheep. The nucleus from a body cell is extracted and inserted into an egg cell that has had its nucleus removed. This gives the egg a full set of genes without having to be fertilised. The embryo is then implanted into a suitable surrogate mother.

It is illegal to create clones of humans in many countries, including the UK.

A human embryo develops from a single cell. This cell divides over and over again as the baby develops. Most of these cells become specialised to do different jobs (a process called differentiation).

After 5 days, the embryo is a ball of cells containing embryonic stem cells. These cells are unspecialised. They divide and develop into different types of cell in the human body.

In adults, there are much fewer stem cells and they can only repair or replace certain cell types. They are found in places such as bone marrow. Bone marrow cells can develop into different types of blood cells. Adult stem cells are used to treat various disease but have limited uses.

Embyonic stem cells however, have huge potential but their use is controversial:

-They are usually take from unused embryos following fertility treatments.

-Thier use involves the destruction of the embryo.

Stem cells could be used in: the testing of new drugs; understanding how cells become specialised in the early stages of human development; renewing damaged or destroyed cells in spinal injuries, heart disease, Alzheimer's disease and Parkinson's disease.