Memory: The process by which we retain information about events that have happened in the past.

STM: Your memory for events in the present or immediate past.

Lab experiment with 24 university students who had to recall meaningless trigrams(SWD 452). To prevent rehearsal, participants were asked to count backwards in 3s or 4s from a specified random number until they say a red light. This is known as the brown peterson technique. Asked to recall trigrams after intrvals of 3,6,9,12,15 and 18 seconds.

Criticism- not actually testing duration, when the participants were counting backwards, the trigram could have been displaced in the STM by the numbers, thus wiping out memory for the syllables.

-Marsh et al (1997) suggested that participants do not expect to be tested after this interval, forgetting may occur 2 seconds after. Suggesting that knowledge of STM duration may not be as clear-cut as thought.

-Nairne(1999) found that recall could happen 96 seconds after. Asked to recall same items in a trial. Interference between items in petersons study led to decrease in recall, suggesting that information remains in the stm for quite a while unless other information replaces it.

LTM: Your memory for events that have happened in the more distant past.

Increasing the capacity of STM

Encoding in STM and LTM

Sensory memory: several stores: eyes, mouth, nose, fingers and tongue etc. If attention is focused on one store then the data is transferred to STM.

Short-term memory: information here is in a 'fragile state' and will disappear quickly if not rehearsed or displaced. STM has a limited capacity.

Long-term memory: Moving data from STM to LTM is also done by rehearsal. The more the information is rehearsed, the better it is remembered(Atkinson and Shiffrin)

Schachter et al(2002) suggested there are 4 types of long-term stores.

Craik & Tulving(1975)gave participants a list of nouns and asked a question about each word. There were three kinds of questions that each participant answered:

Participants remembered most of the words from condition 3 than 1, suggesting that deeper processing leads to enhanced memory.

This has led to a reformulation of the MSM, maintenance rehearsal has been replaced with elaborative rehearsal. 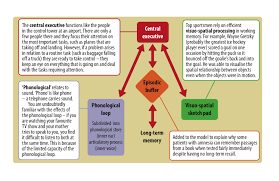 This shows that the form of questioning can have a significant effect on a witness's answer to the question. Possible that post-event information had affected the material before it is stored, altering the memory of the event permanently.

1. One limitation of this study is that it lacked ecological validity

2. A second limitation of this study is that it doesnt show whether memory itself is altered

The participants were divided into 3 groups:

Participants were asked to return to the lab a week later and were asked questions involving broken glass, 'Did you see any broken glass?' There had been NO broken glass in any of the film clips but they were asked if they had seen some.

1. One limitation of this study is that the problem of ecological validity still remains.

This study investigated the effects of weapon focus on eye witness testimony. Participants were asked to sit on their own in a waiting room until it was there turn to be tested.

While sitting in the waiting room, the participant overheard two people in the next room.

Participants were asked to identify the TARGET person from a set of 50 photographs.

Findings and Evalution of weapon focus

-High anxiety meant focus on the weapon rather than the targets face.

Fisher & Geiselman(1992) argued that eye witness testimony could be improved if the police used better techniques when interviewing witnesses. Suggested they should be based on psychological insights into how memory works, and called it the cognitive interview.

1. REPORT EVERYTHING- Witnesses are encouraged to include every single detail of the event, even though it may seem irrelevant or the witness doesnt feel confident about it.

2. CONTEXT REINSTATEMENT-The witness should return to the original crime scene 'in their mind' and imagine the environment and their emotions.

3. REVERSE ORDER-Events should be recalled in a different chronological order, i.e from the final point back to the beginning, This is done to prevent people using their scripts and also prevents dishonesty.

4. CHANGE PERSPECTIVE-Witnesses should recall the incident from other peoples perspectives. For example how it wouldve appeared from another witnesses perspective.