What is an Infection?

An infection is the invastion and multiplicaption of a micro-organism that are not usually present within the body.

Some infections may cause no symptoms or be undetectible, or it may cause some symptoms and be clinically apparent.

Infections may remain local to the area of infection, or it may spread throughout the body via the blood and lymphatic vessels.

What is a micro-organism (microbes)?

Micro-organisms (microbes) are very small living creatures, most of which cannot be seen without using a microscope.

Microbes only cause a small number of diseases, most are helpful to the body.

Microbes play a key role in maintaining life on earth, fixing gases and breaking down dead plant and animal matter into simpler substances that are used at the beginning of the food chain.

Thier activity is exploited for the production of medicines, food and enzymes.

Micro-organisms are classified into 5 different groups:

These micro-organisms are called Pathogens and can be responsible for causing many diseases.

A pathogen is an infectious agent (Germ) that can cause disease and illness to its host. The host is the organism in which a parasite or pathogen does damage.

Pathogens are known as a Virus, Bacteria, Fungi, Protozoa, Parasites and protein.

Each pathogen has a different lifestyle and attacks the body in a specific way.

A virus is a small infectious agent (smaller than bacteria) that is multi-celled but can only replicate itself inside the living cells of its host. They lack the components essential for its own replication and are dependant on the hosts cells for almost all of their life-sustaining functions. consists of a single nucliec acid chain surrounded by a protein coat.

A virus is a intacellular parasite.

Viruses can infect all types hosts, from animals and plants to humans.

Some pathogenic viruses are:

When the host is infected with a Virus, the cells rapidly procude thousands of identical copies of the orginal virus.

Bacteria is a single celled spherical, spiral or rod-shaped microorganism that appears singly or in a chain, existing independently or parasitically. A single bacterium consists of just one cell and is called a single-celled or unicellular organism. It can carry out all 7 life processes, movement, respiration, sensitivity, growth, reproduction, excretion and nutrition. Common bacteria:

There are similarities between plant and animal cells and bacterium, all share a cell membrane and cytoplasm. Bacterium also have a cell wall around them like plant cells. yet bacterium has no nucleous, instead has a single circular strand of DNA called plasmid that floats in the cytoplasm.

Some bacteria causes disease e.g. food poisioning, the bacteria while inside the body reproduce quickly. Not all bacteria is harmful, bacteria like intestinal flora can be helpful to our bodies, this can be found in cheese and natural yogurt. we also have millions of bacteria in our digestive system, having the right mix of bacteria is vital, gut bacteria helps with digestion.

Fungi is a wide variety of single or muli-celled organisms that reproduce by spores, including mushrooms, moulds, yeast and mildews.

Fungi is immotile nonphotosynthetic proists which usually grows in branched filaments-mycelium. it is also a Eukaryotes which is an organism consisting of a cell or cells in which the genetic material is DNA in the form of chromosomes contained within a distinct nucleus.

A common fungal infection is the yeast organism which causes thrush and diaper dermatitis.

Fungi are also used for the development of antibiotics, antitoxins and other drugs used to control various human diseases.

Protozoa feeds on organic matter such as other microorganisms, organic tissues and debris.

Microbes/pathogens can be transmitted via:

How does pathogens reach us

The cycle of transmittion involves: 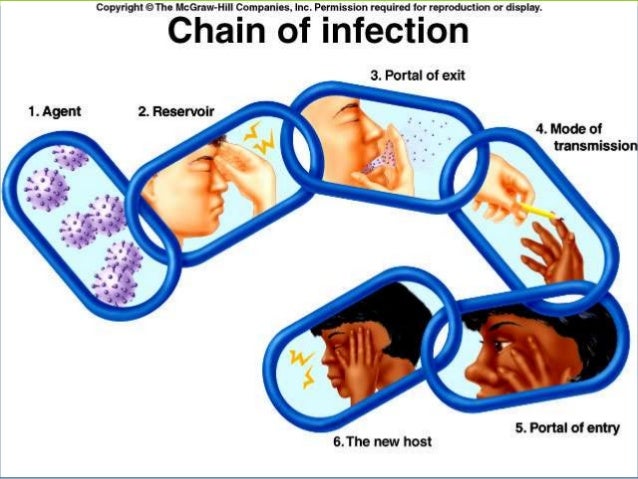 How does pathogens get into our bodies

To cause an infection the pathogens must enter our bodies. The site in which they enter is called the portal of entry. Microbes can enter the body through 4 sites:

Virus is inhaled into the lungs via the mouth and nose. The envelope virus has around 500 spikes sticking out of it. These spikes attach to the cells lining of the lungs, these help the virus get into the cell.

Inside the cell the virus replicates itself to produce new virus particles. The hosts cell is destroyed as the virus particles leaves it. Damage to the cells lining the lungs causes the lining to become inflamed and irritated. Symptoms including a high temperature, aching limbs and a headache may be noted.

The infection is spread by contaminated water and food, or from one infected person to another via the faecal-oral route. The incubation period is 24-72 hours.

The bacteria sticks to the cells that lines the intestines and releases a toxin (poison). The toxin alters the normal process of the absorption of water. Water flows by osmosis- in the wrong direction, from the cell lining the intestine into the gut. The main symptoms include diarrhoea, this can be mild to severe watery diarrhoea. Large amount of water can be lost between 15-20 litres.

Infections can oftern be treated with a course of antibiotics

Portal of entry: breaks in the skins surface

Endospores found in soil, dust, and faeces enter the body through a puncture wound in the skin.

Causing infection local to the area, or more sever infections if the pathogen passes throught the blood stream to other parts of the body.

How pathogens leaves our body

Pathogens leaves the host via:

Once a person has had a diseas they dont normally catch it again because the antibodies stay in the body and remember the microbe which caused the disease.If the person comes under attack from the same microbe the antibodies will recognise it and destroy it.

The person is protected from the disease through this natural immunity.

You can also become immune to disease through vaccination. Immunization programmes and the development of new vaccines play an important role in protecting individuals against illness. Vaccinations work by safely exposing individuals to a specific pathogenic microbe, artificially increasing their immunity to it.

Antibiotics are chemical compounds produced by soil fungi and bacteria. They are used to treat bacterial infections.

The first antibiotic penicilling was discovered in 1928 by Alexander fleming by accident. He isolated it from the mould Penicillium Notatum and found it prevented the growth of bacteria. Penicillin was not available for commercial use until Florey and Chain purified it in 1940.

The 1940's saw the mass production of penicillin.

Specimen collection is usually the first crucial step in investigations that define the nature of the disease. Initial examination of the person, their clinical history and symptoms can determin the need for furthur tests.

Majority of specimens undergo direct microscopic invertigations which is viral for early detection of the causative organism.Certain parasitic protozoa, such as those casing malaria, are identified via microscopic investigation, sometimes the protozoa is mobile therefore visible.

Gram staining is a process where staining substances are added to a sample to differentiate the type of organisms present.

Culture depending on the specimen sent are inoculated onto agar plates or into nutrient broth, then incubated for a certain period of time to and observed for growth. Growth of bacteria is seen as colonies, the size, shape and colour vary according to the type of bacteria. Fungal organisms grow the same as bacteria but oftern needs to be incubated.

The treatment and prevention of the speard of bacteria includes: